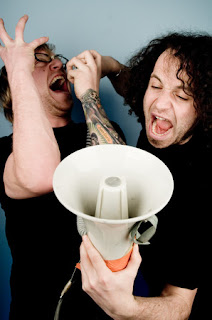 Photo credit: www.benjaminbear.org
No, the Benjamin Bear I'm writing about is not a childrens story, nor is it a person. It's a piano/drum duo from Seattle, comprised of of Mychal Cohen, above left, and David Stern, right.
By incorporating crafty lyrics with an array of atmospheric compositions that lie in the dreamland between folk and progressive pop, Benjamin Bear has bubbled to the surface of the low-key music scene.
The new album "Lungs," available on iTunes and http://www.amazon.com/, and will be in stores April 21, is a nice unobtrusive creation that is perfect to hear on a road trip or at home on a rainy day.
"Station Rest Release" opens this 12-track outing and introduces us to Cohen's raw-but-honest vocals and the duo's dynamic musical intensity.
Tracks like the lamenting "Rusty Truck," the spiral syncopation of "Walls" and private confession feel of "Wilson Ave." show the duo's surreal textures, but also give a glimpse of the potential of the other songs such as the acoustic-guitar laden "Riverbed" and upbeat and jazzy "Frictionless."
The lo-fi recording adds to the flavor of the CD, but there are times when it does get a bit monotonous.
Still, it's in my iPod and I'm glad it's there.

Posted by xokayteamac at 4:36 PM