Romeo Spike "For the Cause" review - Bring On Mixed Reviews

Romeo Spike - For The Cause - Review 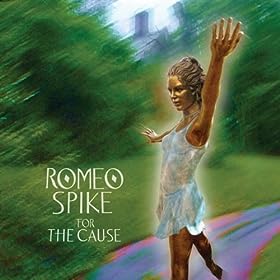 There is rarely anything more funny then the simple oxymoron. The nature of putting to conflicting things together seems to work double for humor. This is what came to mind when I checked out Romeo Spike and their latest effort “For The Cause.” Before I listened to it, I went to their Myspace to get a feel for them, and they had themselves listed as a “Futuristic Classic Rock” band. Wouldn’t it just make it rock then? After a few minutes contemplating, I decided to slide the CD in my stereo for a listen rather then a brain storm.

Well it turns out that what Romeo Spike (Mike Kunz, Donn Aaron) meant was a collection of a classical soul rapped in a 1970’s synth heavy wrapper. In a few words it sounded like chill lounge music if it were to be done by Queen. I don’t mean to cut these guys short though because this is another example of a creative duo coming together and putting forth an effort that sounds like it could have been from several people. Musically, Mike’s vocals are light and soothing while a collection of instruments such as a Rhodes electric piano, a Casio, more effects than you can throw a stick at, as well as the standard guitars/bass are able to create an earthy and relaxing atmosphere for “For The Cause.”

So you can expect that from gentle waves of dissonance you will also get “far out” lyrics. Well you do most of the time. The words are memorable but cross into the chuckling section with lines like “cash in your guns, give in to star power.” Like I said earlier, this feels like something straight from the 70’s so this wasn’t a big surprise.

So how do I feel about it you ask? Well, the lax yet fluid motion of the record feels so warm and fuzzy that it’s almost impossible to ignore. Like a Lionel Richie album, you will be swooned from start to finish with simplistic but futuristic 70’s flow. So if you like synth and loads of effects that will hit you like massaging waves in the ocean, then you will want to check out Romeo Spike because “For The Cause” will do the same to your ears. ~Staff

Posted by STARBIRD BOOKING at 3:51 PM