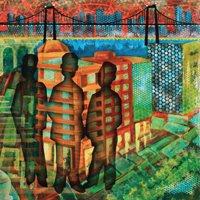 Rating: 90/100 (learn more)
In these troubled times it can be pretty chilly out there for young jazz/fusion players, tougher still on those trying to get their statements out on independently produced albums. Most get lost in the shuffle, buried under the avalanche of white noise masquerading as new jazz, fusion, avant-garde, jazz-rock or whatever. However, on occasion there comes a new artist who qualifies to take up the gauntlet laid down by the likes of Metheny, McLaughlin, Coryell, Kahn, Stern, and Scofield. Mike Pardew is one guitarist who may prove to be in this league.An active participant in the still-vibrant Portland music scene, Pardew has generated local buzz with previous recordings. Now, with the help of two accomplished sidemen, he has produced a mature, balanced and thoughtful album, spearheaded by the title cut, a Latin-tinged jazz-rock piece presumably named after a shade of blue. In "Azul," Pardew employs an effective use of space and harmonic simplicity. Solos are not overly showy and are relevant to the composition, two necessary elements of my litmus test for a noteworthy track. Mike's satisfying guitar work is augmented by bassist Damian Erskine's solid electrified solo, and Micha Kasell's crisp, in-the-pocket drumming. As for the third element in my litmus test – listenability – "Azul" passes with flying colors.
Reviewer: Bill Barnes
http://www.jazz.com/music/2009/2/9/mike-pardew-azul
Posted by xomargaret at 11:13 AM