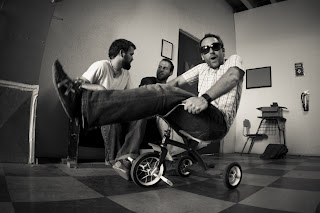 NO GO KNOW
Time Has Nothing To Do With It
The Union Records
With so much music coming out these days in the rock world influenced by the same people it is a difficult task to stand out and be a unique artist or group. For No Go Know, they may fall into that progressive rock genre, but they do their best to stand out amongst the pack with the release of their sophomore album Time Has Nothing To Do With It. The first thing that will grab your attention about the album is that it is a two-disc collection with 18 total tracks. The ambitious release pulls you into the first disc by showing you the outstanding songwriting you can expect going forward into the album on "In Bleeding Kansas," which allows the vocals and lyric to soar over a simple acoustic guitar. But don't let the acoustic guitar fool you, this is a band that has come to rock and they show it on tracks like "My Black Dog," and "Yours Is A Small Still Voice" as the guitars drive you through the song and capture you making you move right along with them. Onto disc two you will find more of the same as the guitars hammer home songs like "Christmas Prayer" and "Life is Forever For Everyone." A collection of material like this one has, with some songs topping the 9 minute mark, is daring and unique in itself, but the consistency that No Go Know puts on display throughout the album shows you the talent that this band offers. If you like one song you will most likely like them all and that is what makes this album an easy listen. If it grabs you upon hitting play then keep on listening cause you will love this.