WERE YOU GUYS ALWAYS MAKING MUSIC LONG BEFORE THE THE BURNING HOTELS GOT TOGETHER AND DO YOU FIND THAT YOU GUYS ARE JUST AS EXCITED ABOUT BEING IN A BAND NOW AS YOU WERE BEFORE THIS ALL HAPPENED? 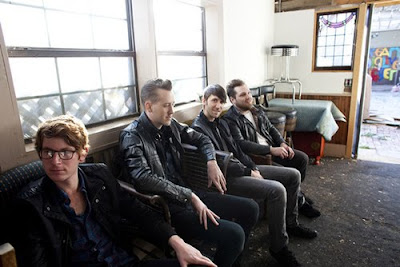 Everyone in the band has been making music is some form for a long time. Matt and I have been writing music together almost 10 years. I feel like the excitement has transferred from being in a band to performing and creating as a collective. Starting a band is exciting. Playing your first show is exciting. I think it’s more of an accomplishment now and honestly, I think we are just happy to still be performing for new people that really want to hear our music.

GUESS YOU GUYS DON’T LIKE HOTELS THAT MUCH (SORRY HAD TO SAY THAT); BUT SERIOUSLY, WHAT ARE THE BEST AND WORST CONDITIONS YOU’VE HAD TO SPEND A NIGHT ON TOUR?

We usually don’t get comedians interviewing us… So thanks for the change of pace. I think the worst was in Chapel Hill or Charlotte. We had met a couple of different people and bands with places to crash and we were trying to weight our options without being rude, but also trying to find a decent floor. We ended up staying with a band that reminded me of a Frat guy band trying to cover Vampire Weekend.

I slept/passed out in the van that night, so I have no idea how bad it was, but early the next morning, I was heavily reprimanded by Marley (our bass player). He said, “The next time we have to stay in a place like that, I am waking your ass up and you’re staying inside with the rest of us.” That said, we are from Texas, so there are a lot of transplants across the country, so we can usually always stay with a friend.

IS IT ALWAYS GREAT TO MEET THE PEOPLE WHO LISTEN TO YOUR MUSIC WHILE OUT ON THE ROAD AND DO THEIR OPINIONS HAVE AN IMPACT ON THE WAY THE BAND WRITES SONGS AT THE END OF THE DAY?

It is a really great feeling to show up in a new city and discover that someone is actually singing the lyrics to a song that we wrote a thousand miles away, but I wouldn’t necessarily say that fans have impacted our writing. That said, I do I think that seeing new cities, meeting new friends and getting to experience these things from a local’s point of view does change your future perspective. Thank you, Omaha!

TELL US MORE ABOUT YOUR DEBUT FULL-LENGTH ALBUM TITLED “NOVELS” WHICH WILL BE RELEASED TOWARDS THE END OF THE MONTH. WHAT CAN PEOPLE EXPECT FROM YOU GUYS COMPARED TO PREVIOUS EFFORTS?

The record is a representation of growing up. When we recorded the Eighty Five Mirrors EP, it was the first time we worked in a real studio, and there was little production involved. The way we wrote and performed the original songs was the way it was recorded sans a few bells and whistles from our producer, Will Hunt. We went into the studio three years later as better players and songwriters, so hopefully that is evident.

Novels was recorded and produced by Hunt and co-produced by Chad Copelin. They helped us get the sounds and spent the time to help us craft these songs, sonically into what you hear. We are all really proud of the record. And we look forward to showing it off to old and new friends alike.

NOVELS WAS MIXED BY MARK NEEDHAM (THE KILLERS, BLOC PARTY), HOW COOL IS THAT; AND WILL THE REST OF THE YEAR BE DEDICATED TO CREATING AS MUCH BUZZ AROUND THE ALBUM AS POSSIBLE?

Mark is a genius at what he does. We were very lucky to have him mix our record; we actually met face to face at SXSW. Very cool guy. First, we are going to be doing a Midwest and East Coast tour to support Novels in late May and early June. The rest of the year will be predominately touring and getting our music out to as many people who care to listen.

ARE YOUR SONGS ALL ABOUT LOVE AND THE “NICE” THINGS IN LIFE OR DO YOU GUYS LIKE TO GET A BIT MORE “SERIOUS” MUSICALLY FROM TIME TO TIME?

We tend to write about love and death. I think the majority of our songs come from normal life experience, but there are some fictional characters that sneak in from time to time. There is a lot of love, but usually gone awry.

DO YOU JUST FOLLOW YOUR GUT WHEN WRITING AND HOPE THAT THE SONG YOU ARE WORKING ON WILL BE A POTENTIAL HIT WITH FANS OR IS THE “NOT KNOWING” PART OF HOW PEOPLE WILL INTERPRET YOUR MUSIC WHAT MAKES IT ALL MORE FUN?

We have never thought about what anyone else will think when writing a song, but I think performing a song for the first time can be nerve racking. Song writing is a creative outlet, so worrying about your critics would probably dilute the process or ruin it all together.

EVER HEARD A SONG THAT MADE YOU WANT TO CRY AND MADE YOU THINK, “I WANT TO WRITE A SONG LIKE THAT”?

I have never cried because I have wanted to write a song, but I have freaked out because it was so good. The first time I heard “Damaged Goods” by Gang of Four, I remember going, that’s a fucking song.

THERE IS ALSO A COOL “ELECTRONIC / 80’S” VIBE IN SOME OF YOUR SONGS AND YOU USE SOME DELAY AND OTHER EFFECTS AS WELL. DO YOU ALWAYS LIKE TO TRY OUT NEW GEAR TO SEE WHAT SOUNDS YOU CAN COME UP WITH?

We are pretty minimalistic when it comes to pedals, effects, and extras. Both producers are very talented multi-instrumentalists, so when we made the record, I think their talents helped fill out our sound. We have been experimenting with keyboards and different sounds lately, so we’ll see where that takes us.

ONE CAN HEAR MANY OF YOUR INFLUENCES IN YOUR SONGS BUT I COULD NOT HELP TO WONDER HOW YOU GUYS ARE PLANNING TO STAND OUT FROM THE “HUGE CROWD” OF INDIE BANDS ONE HEARS ON THE RADIO AND ONLINE ON A DAILY BASIS?

I really can’t tell you one band that isn’t a derivative of a band or a style of music, so I think the best thing we can do as The Burning Hotels, is play fast and keep it simple. I feel like nowadays it seems like every band is trying to be purposely artsy and/or lo-fi just to get noticed for being different. And it’s getting a little redundant.

ANY OTHER COMMENTS OR ANYTHING ELSE FANS SHOULD LOOK OUT FOR?

It’s never too early to plant the seed for a quick to market follow-up to Novels this Fall with something brand new. Stay tuned.

INTERVIEW BY NEIL VAN ZYL
Posted by xokayteamac at 6:34 PM