Caravan of Thieves stirs the pot with gypsy jazz 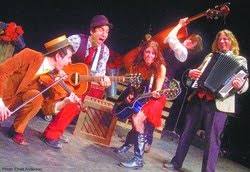 The styles of the bizarre Fuzz Sangiovanni of Deep Banana Blackout and singer-songwriter Carrie Sangiovanni's folky guitar shows were like night and day.
But the artists' styles, over time, have merged, as have their lives.

They met in 2003 at Nectar's, Phish's old stomping grounds, when Fuzz was playing a show with his band Big Fuzz -- a show that almost got canceled.

"We started talking," he said. "She looked familiar."

They discovered they made good musical partners -- and partners in general.

"We started dating and thought it'd be cool to do music together," Fuzz said (a lot of people think it happened the other way around). "Within three months we were playing music together, and then we got engaged."

They were married in 2005 and continued to play music together, their most recent outfit being Caravan of Thieves, a quartet that will play Cafe Nola on Wednesday, April 7.

In Feb. 2008, they formed Caravan of Thieves with Brian Anderson on upright bass and Ben Dean on violin. They played their first show the following month.

The group is often called a gypsy jazz band, but they blend swing, old-time, bluegrass, folk and rock in the mix.

"I think I'm playing acoustic guitar because of Carrie," Fuzz said. "Before that, I was just playing electric guitar and rocking out."

They started as an acoustic duo. Prior to that, Fuzz played jazz electric guitar but wanted to explore the idea of going out as a solo acoustic performer. Going acoustic was a "much bigger challenge" than his years in electric, he said.

Carrie's style, too, changed with the union. Mainly, she got a little more rambunctious.

"I was just sitting in a chair with my guitar," she said. "I admired his energy."

Fuzz recalled his days with Deep Banana Blackout, when he'd roll around and run around stage, which reminded him of Angus Young, guitarist for AC/DC. "He was just really fun to watch," he said. "I wanted to be able to do that."

He and Carrie also have fun dressing up, "classy elegant," as she called it, scouting out vintage clothing stores throughout their tours.

They want to bring a bit of the vintage feel to the show through not just the music but the clothes. They strive to merge time periods.

Fuzz said 1930s swing is one of the biggest influences on their music, and they really homed in on the European gypsy jazz movement.

"That music is all acoustic and it's kind of the same instrumentation" we use, Fuzz said.

They also take some lessons from Bal-musette music -- waltzy, tango stuff of the early 1900s, though they don't make any literal references.

"Bouquet," released in 2009, was their debut album as Caravan of Thieves.

The title is about combining "things that are pretty and elegant with things that are dark and cynical," Fuzz said, pointing out that the album cover shows a little boy who looks like he just did something bad, but he's peering over a beautiful bouquet of flowers.

On May 1, they'll record a live concert in Fairfield, Conn., which they consider their hometown, at FTC on Stage One -- where they played their first show, and where they usually draw their best crowd.

A new studio album is scheduled to be released later this year.