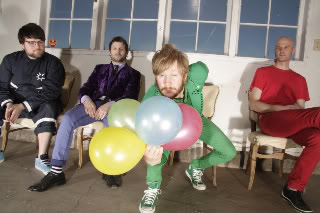 Climber, the four-man group comprised of Dean Webster, Kyle Lockwood, Joe Mengis, and Michael Nelson has been flying under the mainstream radar quite some time. Since their first release in 2004, the band has reported playing in various music bars in and around Portland, Ore. Their first few albums have a feel reminiscent of artists such as Coldplay, Red Hot Chili Peppers and even Radiohead. “Archive,” released in 2007, marked a shift for the group to a more electronic sound. “The Mystic,” their latest album, gave them yet another chance to try things a little differently. While “The Mystic” does a decent job of staying true to their electro-pop roots, it’s finally created a new sound that is more definitive to the group.

Much like Lockwood’s cover art, the majority of the album is upbeat, and the background music is bold. The background melodies are where “The Mystic” really shines. The albums’ tracks range from slightly electronic with piano overlays to dreamy melodies. Wrapped in all of this are Nelson’s crisp and stressed vocals. The two tend to mix decently over the span of the album, gaining a kind of fervor from the upbeat tempo of the surrounding music. Interestingly, much like the cheery cover art and the tale of the monster of which it speaks, the enjoyable beats are juxtaposed by the sad stories they tell. Nelson weaves themes of isolation, irresponsibility and communion (or a lack there of) with nature and poor judgment throughout, creating a bit of lyrical dissonance at times.

All in all, it’s a tossup as to whether one may enjoy Climber’s new sound. “The Mystic’s” songs don’t feel as natural or blend as well as those from older albums. Climber was obviously trying to push its musical envelope, which may turn off some fans. There isn’t anything particularly wrong with this album, but it’s not extraordinarily good either. Nevertheless, the album is definitely worth a listen.
Posted by xokayteamac at 9:40 AM