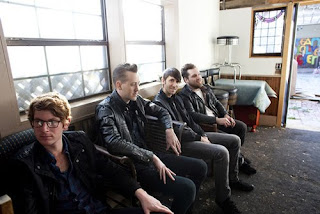 Forged under the inspiration of post-punk and angular melodies, The Burning

Five Mirrors, licensed by Razor & Tie. This EP won the Fort Worth Weekly's

Son Cats are a psychedelic garage-pop band hailing from Connecticut. Their

from For Arbors / For Satellites and MMMM Records. The Cats invoke these

Seven Samurai, The Vaselines watching Dock Ellis try to bean every member of

the 1974 Cincinnati Reds, CCR making a soundtrack for a Clint Eastwood movie

The Lesser Knowns open this one, but are really living up to their name

since they are barely listed anywhere, and so I almost missed that they were

rock. The three tunes on their Myspace are a mixed-bag. I was digging on

their tune Life of the Party. A little bit Fall-ish. If they have more of

that going on, then Lesser Knowns might be betraying their name in the near

future.
Posted by xokayteamac at 1:53 PM