Age/Sex/Occupation's This Side of the Fence on CD 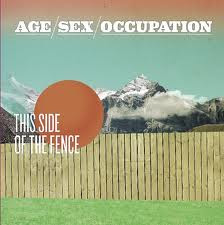 Age/Sex/Occupation, a trio from Portland, sounds old-fashioned without being retro. That's not an easy thing to do. It's one thing to channel a sound from the past, something akin to what Sharon Jones and the Dap-Kings do in their sleep. It's all a matter of making everything sound like a lost classic. That requires songwriting skills most of all, but a pure, unbridled love of your genre also helps. But what if you could do that without having a specific genre, or even basic sound, to emulate? That's where A/S/O throws a curve ball, making their new album This Side of the Fence both thoroughly enjoyable and almost impossible to discuss.

Even the promo material seems undecided about the band's sound, as it draws comparisons to such diverse performers as Hall and Oates, David Bowie and the J. Geils Band. Frankly, it sounds like none of those--in fact, the band's formula shifts so dramatically from song to song that you can play this game all day and still not have a clue until you actually do some listening. The only real constant is singer Daniel Weiskopf's voice--he's a crooner in a traditional sense with strong, distinctive vocals and yet he occasionally loosens up and sounds no less casual than John McCrea of Cake. Very much a front man, he also plays guitars and keyboards and writes all the lyrics, with bassist Justin Keith and drummer Joey McAllister offering solid and consistent support.

It's clear, however, that Weiskopf is the creative gadfly here, drawing from multiple inspirations. The album's opener, "Dirt Isn't Dirty," offers a bluesy, horn-based Chicago sounds that's equal parts Was (Not Was) and the Saturday Night Live house band back when G. E. Smith ran things. You say to yourself, oh, this is going to be one of those soul-blues-rock hybrids, and then Weiskopf turns the wheel straight into early '80s pop/rock. I'm not sure why, but the Greg Kihn Band kept coming to mind during songs such as "Volcano" and "Glass Slipper". Greg Kihn, for Pete's sake. Seriously, when was the last time you thought about Greg Kihn? By the time the uniquely modern-sounding "Lullaby" closes the album, Weiskopf's been all over the road, knocking over fruit stands and narrowly missing baby buggies. (That's an apt metaphor, since Weiskopf original studied film scoring, and that's probably why he seems so comfortable with musical variety.) I can't tell you who this band sounds like, honestly, and maybe that's the mark of something special.

One other comment, though: the sound quality is superb. Age/Sex/Occupation sounds like a band that's awesome live, and the album captures that energy and spontaneity. I've been paying a lot of attention to drummers lately, and McAllister knows how to beat his kit with vicious authority. He also knows how to mix it up and follow Weiskopf's muse, whatever that may be from moment to moment. Mastering engineer Justin Phelps, who has also worked on the splendid Jodie Holland CDs, deserves a little love for another great sounding record. 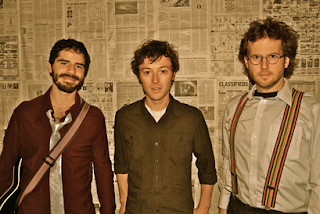