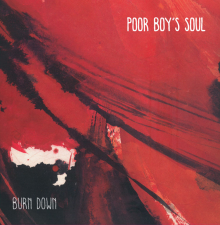 The first time you hear Poor Boy's Soul's new 7-song EP, Burn Down, you're immediately tempted to draw parallels to both The Black Keys and The White Stripes. All three acts mate a blistering, bluesy guitar to a stripped down drum kit, although PBS is certainly ground much deeper into the Mississippi Delta mud than those more famous duos. Then it slowly dawns on you. Is this just one guy, pickin' on his slide guitar while manuevering both a kick drum and a tambourine and singin' with an intense growl that combines pain, anger and hobo-esque sense of loss? It is one guy, Trever Jones, who's set on "stompin' and shoutin' till the heavens cry."

Once you come to this realization, Poor Boy's Soul adds about a dozen layers of depth, and what initially sounds simple, pure and focused now becomes feverish and darned near breathtaking. Jones isn't reinventing blues rock here, but it does pour unimpeded from his poor boy's soul onto the stage into and into every nook and cranny in the joint. From listening to this one CD, you'll immediately know that this is the type of performer who forges his reputation on remarkable live performances. Does he really recreate the sound of this CD on stage? you'll wonder. Can I see it? And when?

Vocally, Jones follows blues tradition by favoring growl over range and you'll swear he's delivering every syllable in the same goddamned note, which is just fine. The lone exception is the seemingly gentle ballad "Annalisa" that closes the album, but what sounds like tenderness is betrayed by haunting lyrics such as "Annalisa, you're stronger than those demons in your head." Those are heady lyrics to sing about a mother of three, and he delivers these words with the unmistakeable tone of someone who has lived through the ten plagues of Egypt and can't wait to see what shit's coming down the road next. He may not have a lot of tricks up his sleeve or gears in his tranny, but he's unbelievably commited to his art and that's more than enough. When he comes to town, I want to see him--is there any higher recommendation than that? 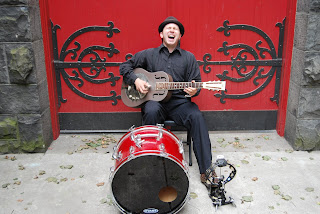