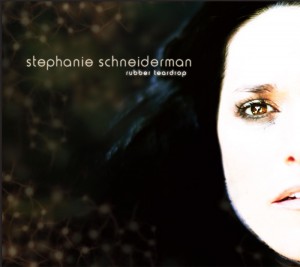 Stephanie Schneiderman has made a name for herself with her powerful voice and acoustic folk/pop instrumentals, but in recent years she has started to branch out and explore styles that are outside of her comfort zone. On her newest full length Rubber Teardrop Schneiderman has once again teamed up with DJ/electronic musician Keith Schreiner to create songs that have an electronica/trip hop feel to them while still maintaining much of the same atmosphere that was created on her previous releases. It’s an interesting new direction that helps this singer/songwriter branch out while still retaining what attracted listeners in the first place.

2008’s Dangerous Fruit was the first time that Schneiderman’s material had taken on an electronic tinge, but for the most part it kept the same somber, slow feel that had always been a hallmark of her songs. Rubber Teardop is noticeably different because much of its material feels a lot faster and brighter than before. While I haven’t heard all of Schneiderman’s discography, the songs that I was able to look up and listen to had a very down-tempo and sad feel to them, but the ones here are much happier sounding and are filled with textured electronic melodies that feel like a combination between sprawling soundscapes and more direct pop material. But even with all of these elements, Rubber Teardrop is still a rather subdued album as the two musicians manage to do a lot with the least amount of sounds. A few of the songs do have too similar of a feel to each other, but there are still a number of standout moments.

While her instrumentals have never been bad, it has typically been Schneiderman’s voice that has been the defining element of her music. This still seems to be the case on this album as her singing is absolutely gorgeous and it sounds as though she pushes herself into some higher registers than before. There is a nice balance between soaring melodies and mellow whispers, and these are used to create very different sounding arrangements. Songs like “Hush” impress with their loud and bold approach, while the cover of Elliott Smith’s “Between the Bars” succeeds with its soft melodies that just barely rise in dynamics to grab your attention.

She may have explored electronic elements on her last album, but it feels as though Stephanie Schneiderman has done a lot more with them this time around and attempted to branch out even further. There are some definite changes in the air, but all of the familiar elements remain and I think that will help the release appeal to both newcomers and established fans. I would like to see a little more diversity in the future with the beats themselves as a few of them fall into similar territory, but aside from that this is a well done album that has a lot to offer.