Can "Mister Hipster" slam a pig? Jordan Carp can! 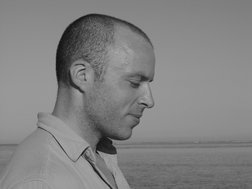 Jordan Carp a Boston boy putting out "Slam Pig" is something worth checking out. What I can't pin point is the genre he should be in. Carp is not quite pop enough but yet not singer songwriter and I dare not stick indie rock on this since that label is becoming so vague.... I guess this is a good thing right!? There are British sounding vocals, synth, prog, punk, pop and singer songwriter elements and it's really all cohesive!

The artwork for Slam Pig threw me through a loop. I thought I was about to listen to some bad punk music. Luckily for him I put that disc in I wasn’t in the mood at all for punk that day. Wondering if this is why I don’t see more reviews out on this album. Maybe they had the same thoughts I did on associated the artwork with a certain genre. These days artwork is so important, it’s often the first impression a band can leave with someone. With stacks of 100s of CDS staring at them this is one way i would week through it as well as I know other do too!

The stand out tracks are; "Mister Hipster" which he kindly provided as a free mp3. "Slam Pig" and "Goodbye Julia" shows the diversity on the album nicely. I get the comparisons to Elvis Costello and maybe Interpol. Other than that he is his own artist. So congrats to you Jordan maybe people will be using you as a comparison in the near future!