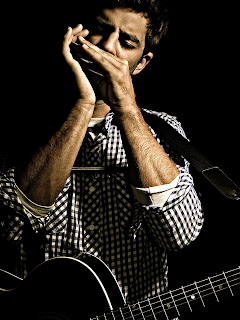 Can you remember first album that you ever got (purchased or received as a gift)?  Do you still listen to the band or music like it?
The first album I received was actually a gift from my father. It was a set of Jerry Jeff Walkers Greatest Hits. It changed my life. Got me turned onto a side of music i had never heard before, or even knew existed. From there I found other Texas boys like Guy Clark, Townes Van Zandt and Lighnin Hopkins. These guys are pretty much what made me want to learn to play the guitar and write songs for a living. I'll never forget that record and I still listen to it to this day, even though its so worn and ragged it skips every other song.
Which instruments do you play on this album?
On "Hence the Blues" I play Rhythm Guitar, Sing Vocals, and play the Mouth Harp.
A great track you did was “Coo-Coo” would you please tell me how you went about picking this cover?
Yeah thats gotta be one of my favorite songs. Its about running moonshine up the mountain, but there's a discrepancy who wrote it. I've heard its a old Traditional song and also heard Clarence Ashley wrote it. Townes Van Zandt covered it on his "Road Songs" record and the first time I heard it I loved it. His flat-picking is just killer. And the fiddle doesn't hurt either. When we got into the studio to track the song, my buddy Matt Harlan (who just released his album titled "Bow and Be Simple" , which was recorded over in Europe this past year) just completely ripped up the lead guitar. Hilary Sloan played fiddle on the track. She's unbelievable too. I really am privileged to have been able to work with the musicians I did. We turned the song into a more rockin piece. I'm really happy with how that track turned out.

Do you have any bizarre songwriting tactics?
I don't really have any bizarre songwriting tactics.  I never try to force it. Thats something you here a lot from songwriters and I feel its important. The minute I start trying to force something out on paper is the moment I lose the song completely. I feel my best songs are the ones I've written in ten or fifteen minutes and haven't touched since.
Where can I find you in Houston on a typical day? Favorite spots (eats, drinks, music, shopping)
On a typical day you'll probably find me in Montrose. Its a neighborhood inside the loop of Houston with so much deep history in art. There's so many great cafes' and coffee-shops (shout out to Cafe Brasil and Agora). Museums like the Menil and the Menil Park. You could waist a whole day in a one block radius and have absolutely no problem with it.  Hanging out in Montrose you kind of start to forget that you live in the 6th largest city in the U.S. As far as music venues in Houston i'd have to say my favorite is a tie between Fitzgeralds and The Continental Club. 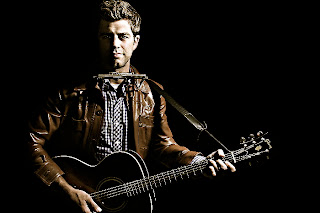 How did you come up with the album title “Hence the Blues” since it’s not just a blues album?
Yeah its kind of funny. People have approached me and asked that same question. A lot of people expected it to be a Blues album because of the title. But its really not even close. Its more Americana than anything. I chose the title because I thought it pretty much summed up the sentiment of the entire record. Most of the songs on the record unfortunately are downers about heartache and sorrow. People felt the blues before anyone ever wrote a blues song. The Blues is a feeling. Its a certain emotion of being down and out. Whether it be over a girl, money, or your dead dog. Thats the blues.
What kind of touring are you doing now and in the future?
Right now I'm playing mainly Texas. Houston, Austin, Dallas/ Ft. Worth. The music business is tough for new acts to stay on the road, but i've found a nice little groove in Texas and its working out nice. Its still in the works but I'm planning a run west in Summer 2012.
CATCH HIM LIVE
March 30, 2012 at Avant Garden (Houston)
March 31, 2012 at Hills Cafe (Austin)
Dream tour co-headliner? Dream tour vehicle? Dream tour rider?
My dream would be to open for a few people. Jerry Jeff Walker as mentioned earlier has been a great influence on me. Todd Snider is one of my heros. I mean he's what you call a real troubadour. He goes from city to city with just a guitar, harmonica, and his songs. He's definitely one of my favorites. I'm really looking forward to hearing his new record "Agnostic Hymns and Stoner Fables". Newer guys on the scene I really like are Justin Townes Earle and Joe Pug, who both have records coming out in March as well. 2012 is shaping up to be a great year for music.
Biggest indulgence in your daily life?
Cigarettes unfortunately. Though I'm trying to quit. They say its harder to quit smoking cigarettes than it is to stop shooting heroin. I've never shot heroin so I cant really add much to the debate but trying to quit smoking cigarettes in extremely frustrating. Another indulgence probably would have to be Mexican food. I could eat that every day and die happy. And grass... but thats a conversation for another time...
Greatest invention of the modern world?
song and dance...its good for the soul you know?
What was the last thing that made you smile?
My two little nieces Evie and Ellie. They think they're princesses. I'd have to agree.
What would you like people to know about you?
Keep your wallet tight and your shoelaces tied. You never know when you might have to make a run for it.
http://www.jonathanrossmusic.com/
www.Facebook.com/JonathanRossMusic 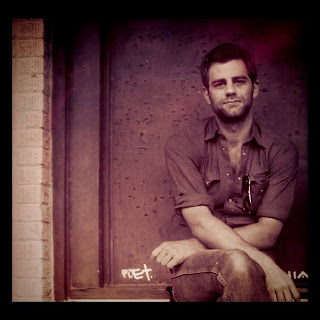