Within the first few seconds of Microtia’s sophomore effort it becomes pretty obvious where their influences lie. But that’s not a bad thing. The deluge of digital dissonance and progressive digressions combine the spacey prog-rock of groups like Muse with the frantic post-punk of At the Drive-In. That may sound a little messy, but they make it work through sheer force of will. These Portland natives demonstrate a massive amount of energy and passion that carry this CD a long way. 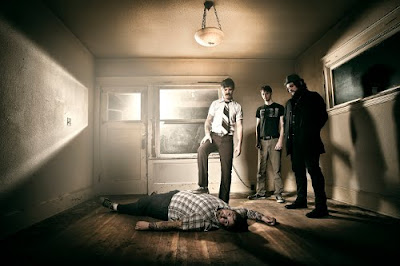 There’s no doubt that these guys love what they do, so much so that you can’t help but love it too. The level of craftsmanship involved in the songwriting embraces the sort of indie/DIY spirit that reaches all the way to the album case, which was made from the band’s recycled beer, pizza and cigarette cartons.

Most of the songs on the album have a gloomy veneer full of minor keys, but there’s a definite playfulness just below the surface. “That’s the Problem With Owning Half the State of California”, for example, continues a sustained three minutes of melancholy sad-sackery before inexplicably dropping into some light Led Zeppelin jamming.

However, amid all of the wildly dynamic music, Eric Leskovar’s vocals often prove to be a drag on the songs. The drawing out of notes and the repeating phrases like mantras seems to be aimed at creating the sluggish trance-like effects of stoner-rock. And on tracks like “1000 % Sure” that singing style brings a cool Mastodon-esque vibe, but it just doesn’t work well for most of the album. With many songs ranging between five-to-seven minutes, the vocals wear out their welcome long before the track ends. It feels like Leskovar keeps stomping on the brakes while drummer Tim Steiner is trying to drag everyone forward.

Microtia is definitely working toward something amazing on Spacemaker, they just haven’t quite made it yet.