On The Tip Of Their Tongues

The Paper Tongues began organically, coalescing from within the Charlotte, NC music scene in 2007, eventually releasing their debut album on March 30th, 2010. The future members of the Paper Tongues drifted into the orbit of Uptown Charlotte, where those who had something to play and wanted to be heard go. It has been misquoted at times that the Paper Tongues created something called The Improv Music Experience. It was nothing so formal as one might infer from the misquote. It was more in line with a jam session with different musicians joining the fray at will. Yet, it did serve an important function as it introduced and nurtured those who would eventually forma the Paper Tongues.

It is a rare thing for a band to meet, meld and mature in such a short span of time. Going from performing impromptu jam sessions, then laying down demo tracks and promoting them on MySpace, which gained them an immediate moderate notoriety and jump started their journey through the world of the club circuit. Fast forward a short time later and we see the group as polished performers, introducing the masses to their music through their self titled debut album, which ran up to #110 in the Billboard charts. The spotlight began to shine more intensely on this seven member group and they began touring with the likes of Flyleaf, Everclear and Switchfoot and, at various times, sharing the stage with Anberlin, 30 Seconds To Mars, Rise Against and Muse. They have just recently been booked to appear at the Bonnaroo Festival on June 12th. Quite a huge leap for such a newly formed band, but judging from their sound and performances, it is an honor that is well deserved. 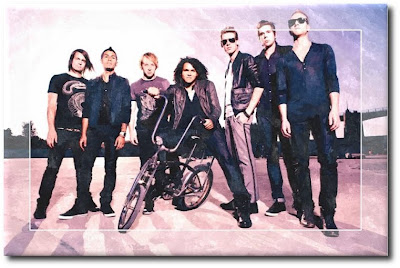 Describing the band’s sound is impossible. They have, in other interviews, described it as “club rock,” but that is an oversimplification. While their music does possess the incessant hooks and danceability that is a requirement of the club scene, but there is more depth to their lyrics and more of a layered texture to their rhythms and melodies. All seven members of the band bring various influences to the sound of the whole and almost every conceivable musical genre becomes can be found lurking within the band’s tracks. From the pop-hop, maniacally insistent song Ride To California to Trinity, with its roughly apocalyptic R&B vocals set against a backdrop of electronic elements and a symphonic wall of guitars.

Aswan North possesses a beatific face framed with spiraled curls and a voice that runs the gamut from harsh hip hop to intensely burning R&B. He possesses a shamnistic stage presence, like a hip hop Jim Morrison, his body becoming another facet of his voice, interpreting the lyrics with an animistic wave of emotive motion. The other members of the band are a constant surge of movement and sound with Cody Blackler working the keys of his Fender Rhodes, Devin Forbes and Joey Signa laying down the guitar tracks while Daniel Santell wields his bass guitar, creating a running rhythm on each song. Jordan Hardee keeps the beat behind his drum kit, producing a percussive drive behind the band while Clayton Simon utilizes his synthesizers for flourishes and persistent rhythms, holding together and expanding the sound of the band.

I was recently able to correspond with one of the guitarists from the Paper Tongues, Devin Forbes, prior to the announcement of their upcoming Bonnaroo appearance.

J.T.: This is kind of a multi-tiered question: With bands like Switchfoot, Flyleaf, Muse and yourselves, there is a vastly shifting terrain within the music industry. It seems like the whole industry is changing and your group is on the forefront of this change in terms of marketing, performances, venues, etc. Do you see this change as bringing the fans and the group closer together as opposed to the “supergroup” days when fans filed into an arena, the band played their set list and then everyone went home?

Devin: I really hope so. Not that we don’t want to reach as many people as possible…we would love to play arena’s if we got the opportunity…but the band/crowd interaction is so important to us. The first thing Aswan does at the beginning of every show is jump out in the audience to shake as many hands as possible. We love hanging out after the show to meet people and actually make some kind of connection beyond the performance. As far as things changing from the “supergroup” days, I really don’t know what it’s going to look like a year from now or 5 years from now. We’re just taking life as it comes and trying to be as prepared as possible for changes that are inevitable.

J.T.: Have these changes affected the way your music is created, possibly giving you more freedom to write and create works that reflect the really, real world?
Devin: I think that there has been so much music in the past however many years that is extremely fun to listen to, but doesn’t really have a message. People are ready to hear something positive that actually hits on deeper issues. Granted, I listen to just about anything and there is obviously a time and a place for every kind of music, be it hip-hop, rock, dance, club, funk, folk, or jazz. We write about what means the most to us and hope that it touches somebody in a real way.

J.T.: Your music is such a fusion of so many different influences, from hot hip hop beats and hooks to crushingly heavy riffs; does this endless well of energy make it difficult to create a signature sound or does the sound kind of create itself?
Devin: It has been somewhat been creating itself. When you put 7 musicians from completely different backgrounds in a room and tell them to write a song, the outcome is a complete mystery. There are so many influences floating around our group and showing up in songs where we’d least expect it. There really is a piece of everybody in our music which gives it a sound we’re not sure what to call. It’s hard to define, but it hasn’t been hard to create our sound; it’s just a combo of all of us. Of course we are still trying to figure out what exactly our sound is. I think it will always be a collage of different styles.

J.T.: You can feel a lot of the essence of each member of the band’s personality and essence and contributions in each of the songs Paper Tongues has performed. Does that ever leave any of the members of the group feeling emotionally drained or vulnerable?
Devin: Of course! Performing in front of people is the most naked and vulnerable you could ever be. When we write these songs, we’re in a room to ourselves and we have the freedom to explore anything we want with music without being judged. When you play in front of people, it’s taking something you have written, an expression of you innermost being, and putting it up for judgment. The audience has every right to simply say, “Eh, this really isn’t that good”, but you just spent a month working on wording it just right. It’s hard to put that much personal emotion on the line every day.

J.T.: With seven members, does it become a logistical nightmare to tour incessantly as you do?
Devin: Yeah, it’s insane trying to get 7 people on the same page every single day. Being on time for sound checks, interviews, radio performances, shows, signings, etc, is a nightmare in itself. We do our best and truly love what we do. We love being busy and touring all the time. This is our passion and we do it with zeal. It’s hard, but worth every minute.

J.T.: What are the big things coming up for Paper Tongues in the near future?
Devin: We’re playing Bonnarroo here in a couple weeks! I can’t wait for that. The roster is absolutely incredible this year as always. We’re touring with Civil Twilight and Neon Trees this summer, so make sure you find a show close by and come see us. We’re playing “Lopez Tonight” on the 24th this month. Other than that, we’re just going to be touring our butts off for as long as we can.

erratic news here
Posted by xokayteamac at 11:33 AM