come across an artist that offers a new musical perspective in a specific genre. 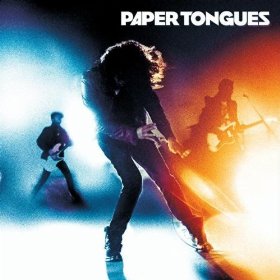 
It is always a joy to come across an artist that offers a new musical perspective in a specific genre. It is even rarer to hear a band that successfully combines various genres to bring a sound that is completely unique. Although not strictly a Christian band, the seven-piece Paper Tongues brings a distinctive blend of rock, hip-hop, electronica, and funk, leading to a debut with a very memorable sound.

The self-titled album begins with a strong variety of opening tracks. The smooth, funk/pop sound of the opener, "Trinity," presents the struggle surrounding holding on to the Father, Son, and Holy Ghost. Next comes a sort of in-your-face, faster tune, "For The People," which shouts lyrics of encouragement to those wiling to stand up against the majority. "Ride To California" is a creative, fun song, with a sound very reminiscent of Family Force 5.

Perhaps the track that best presents the band's faith, "Get Higher," is a powerful song with lyrics that contain an earnest plea to praise ("All these demons in my head, come on, let's kill them with sound…I get on my knees and cry out, everything I have is Yours now…When my back's against the wall, You're the hand that breaks my fall"). Paper Tongues then changes gears to a slightly questionable song, "What If," which appears to be about regretting taking things too far before getting to properly know a girl. The tempo is turned back up with the album standout, "Soul," which could easily become an anthem for Christian audiences in regards to sharing their joy with others.

Up until this point, variety is evident between each song. "Everybody" offers yet another new musical and lyrical style. While most bands transition between a chorus and verses, Paper Tongues makes it clear in "Everybody" that they are capable of seemingly taking snippets of various songs with differing sounds and morphing them together into one song. Overall, this leads to a rather interesting listen. This is also the case in the thoughtful song, "Rich And Poor," which gives the band's opinions on how prayer and kindness are necessary on both sides of the economic spectrum.

Although it is clear that Paper Tongues excels in faster, funk/pop songs, the two slower tracks, "Strongest Flame" and "Love Like You," are also unique and both have powerful lyrics. However, on the lyrically deeper tracks, it is still difficult to distinguish whether Paper Tongues is singing with a certain person, God, or simply the power of music in mind. Even still, the messages of hope, love, and helping the unfortunate are definitely prevalent in most tracks.

Paper Tongues really has created music with soul, with a mixture of sounds that perhaps comes from having seven members with varying musical backgrounds. Even if their songs cannot all be labeled as "Christian music," the themes of hope and encouragement will be apparent to both the Saved and the Unsaved, which certainly cannot be considered a bad thing.

- Review date: 7/6/10, written by Sam Schaumberg of Jesusfreakhideout.com
Posted by xokayteamac at 8:30 AM