Distorted handclaps initiate an unnerving atmosphere just before the full on electric ensemble is launched. 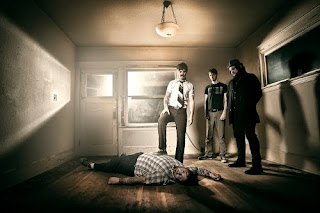 Half of what you get with the new Microtia album, Spacemaker, is nine smoking songs recorded by the Portland trio. The other half of the equation is the packaging for the new release, which was made exclusively from Pabst Blue Ribbon and Marlboro Lights boxes. This alone seems like every hipsters dream release. This CD has been in the works for quite some time, but is officially coming out this month. Here is a rundown:

The energy fueled opener, “Can You Hear the Jets,” interestingly bridges the ground between Muse and Soundgarden. There is an immediate energy to the song that is missing from a spectrum of artists in the current scene. “1000% Sure” follows suit with similar Muse/OK Computer-era Radiohead rock and roll disorder.

“I’ll Fight Harpsichord” introduces some wah guitar along with more metal undertones. By this point, the eighth or ninth PBR is starting to really sink in. “Tone Mountain vs. the Body of Riffage” is perhaps the album's highlight. The one and a half minute introduction alone is close to sublime and there are some memorable progressive rock melodies interweaved in the track. Acoustic number “Add Insult to Injury” is one of the standout songs as well. Distorted handclaps initiate an unnerving atmosphere just before the full on electric ensemble is launched.

There is a West coast tour taking place during September where the new album will be available, however, there do not appear to be any Washington state shows scheduled yet. For further information, please refer to the group’s myspace page. Maybe something local will soon pop up.
Posted by xokayteamac at 8:34 AM