The Memorials release debut album at NEW PARISH on tuesday! 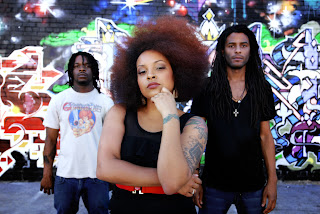 Importing a soul singer to a hard-rock template could have been a risky decision had the singer not been Vivica Hawkins, and the band not been Thomas Pridgen's gutsy new power trio, The Memorials. In this case, it definitely worked. Pridgen and Hawkins actually have a long history together. They met more than a decade ago at Berkeley Mt. Zion Missionary BaptistChurch, where Pridgen played drums and Hawkins cameoed, under the wing of Oakland Interfaith Gospel Choir. Their friendship became a relationship, and a fruitful artistic one at that. The two both attended Berkeley High and Berklee College of Music, and parted ways when Pridgen left to tour with The Mars Volta, and reunited a couple years ago. Now, their music is inimitable, best characterized by the harmonic fog of "Day Dreamer" and the funk undertones of "West Coast," an homage both to weed and to the band's hometown. Hawkins' vocals cast a warm glaze over any two-chord guitar riff. At The New Parish (579 18th St., Oakland) on Tuesday, Jan. 18. 9:30 p.m., $8, $10. TheNewParish.com

— Rachel Swan
Posted by xokayteamac at 10:55 AM