Why import for your euro-disco needs? Now, more than ever, is the time to buy American, dance American, dammit! 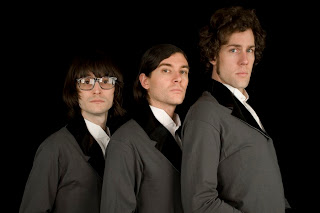 Why import for your euro-disco needs? Now, more than ever, is the time to

Oakland have discovered the funk and found it to be good. Singer Bailey

Winters warbles a little like Mick Jagger, but comes off rather more

convincing on the outright disco numbers than Mick generally does.

territory as a novelty act. Thankfully, his sincerity carries the day. Just

how sincere, is debatable. “Let me rub you down with brandy, let me put

you in my car” kinda sums up the lyrical flow. No heavy thinking is

allowed (or desired) on this dance floor. Strength carries a good bag of

mixed tricks, much like past art-schoollers the Talking Heads. The band

minute up and down the dial. Casio tones and drum machines rule the

nighttime under the big mirror ball. 100% irony-free and good for you, too.