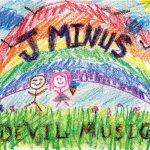 With album artwork scrawled in frenzied Crayola and an opening track titled “Congratulations, You Suck,” J Minus’s “Devil Music” could have gone in quite a few different directions. Luckily, the band manages to not fall prey to its own irony on this charming 13-track journey through radio-friendly indie pop. The record flows almost startlingly well, tying together a myriad of genres and styles with impressive ease.
Their label states, “This is not your typical rock group,” which is pretty easy to do when you’re not actually a rock group. What J Minus does is a blend of indie, pop, alternative rock and hip-hop that’s accented very tastefully with folk, lounge, country, soul and even a little emo pop thrown in for good measure. By the time you’re halfway through, you almost don’t realize that “The One,” a full-on alternative rock banger, is starkly different than the banjo-led, hip-hop-infused folk of the opener. Although this transition should be jarring, the boys of J Minus handle it quite smoothly.
The secret lies in J Minus’s core sound — which is poppy, groovy and soulful — that they then accent with whatever outside style they want. It’s the perfect indie answer to hybrid-pop acts like Maroon 5 and the Script, and you can’t help but think that the next “Breakeven” might be in here somewhere. The vocals are soulful, yet not overdone, similar to Teddy Geiger or Michael Bublé, and the lyrics are impressive at times, like on “Who We Were”: “Johnny was a young boy / without much of a family / six friends to his name / made of steel and harmony.”

Yet even this great of a record has its flaws. “Devil Music” suffers from an inconsistency, in that the first two-thirds are clearly stronger than the final third. Additionally, the lead vocals, which are split up across the record, favor one of the three singers.
Besides the album’s weak tail end, J Minus has put together a fluid record that is fun, unique and surprisingly endearing. It’s an album you can run through over and over, and once it gets in your head, you find that “Devil Music” is a helluva good time.
Posted by xokayteamac at 7:01 AM