seemingly spent loving hours listening to Kyuss, Queens of the Stone Age or The Sword 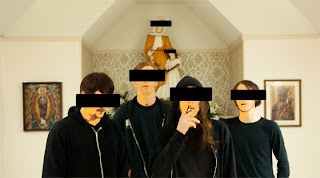 White Orange release their debut self titled release having seemingly spent loving hours listening to Kyuss, Queens of the Stone Age or The Sword and deciding that they want to infuse that stoner doom with a brightness and melody not usually associated within this genre. It isn't exactly reinventing the wheel, rather it is more like something that Husker Du era Bob Mould would have brought to this style, although the results are still reasonably captivating and original none the less. Kicking out an opening riff that could easily be on the next Foo Fighters album, "Where" quickly morphs into a mighty sludgy riff, although one that is played at surprising speed. Vocalist, guitarist and the band's sole songwriter, Dustin Hill leads from the front, although with his easy style of vocals buried deeply under some washed effects it is more of a floaty, spacey vibe than an aggressive in your face meltdown. Added to that are little bursts of higher pitched, melodious vocals which bring a welcome alternate focal point, although never be fooled into thinking that the riff isn't always king here, as it plainly is. Ably assisted by Ryan McIntyre on guitar, bassist Adam Pike and drummer Dean Carroll, this mix of styles is repeated (maybe slightly too often) across the eight other songs on the album. Hill is a vocalist to be reckoned with and while he and McAllister combine mightily on guitars, the likes of "Color Me Black" and "Sunspots" benefit hugely from the ferociously accurate drumming from Carroll. Busy though the stoner genre has been in recent years, maybe it is time for some bands to come along and inject something ever so slightly different into its sludgy ass and with their well constructed and slightly more melodic approach White Orange may well be one of the bands to set that ball rolling. Even if they aren't quite the finished article yet themselves.
Track Listing
1. Where
2. Color Me Black
3. Middle Of The Riddle
4. Dinosaur Bones
5. Wonderful
6. Kill The Kids
7. Sunspots
8. Save Me
9. Sigourney Weaver

Posted by xokayteamac at 2:44 PM