GIANT SQUID - There are low-tuned guitars and slow tempos that place them in sludge metal. 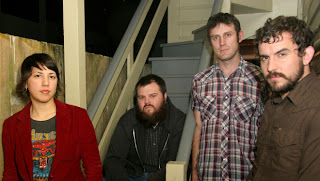 (CBS) Giant Squid is one of those bands that defies categorization. There are low-tuned guitars and slow tempos that place them in sludge metal. The band's tracks are long and many of them have movements that could place them in progressive rock.
Lead singer and guitarist Aaron Gregory sings in a guttural growl or a wailing scream. Then vocalist and cellist Jackie Perez Gratz will sing a sweet harmony or countermelody and bring the band and the listener back from the brink.
So here's a new category for Giant Squid: Awesome. As in inspiring awe. It's rare to hear a group of musicians go between styles, emotions and moods so honestly and organically while still rocking your face off. The live shows will leave you spent.
This band, rounded out by Bryan Beeson on bass and Scott Sutton on drums, has evolved from a bombastic, dirge-like doom metal band to a progressive, classical-minded rock outfit to a nimble, melodic, riff-heavy powerhouse over its career (and sometimes within the same song).
The band's 2009 epic and beautiful full-length "The Ichthyologist" will get a 2011 follow-up, the five-track, 35-minute EP "Cenotes," coming Oct. 25 on Translation Loss Records (with a vinyl release coming in 2012). The band says its new material embraces a "Middle Eastern aesthetic" and is "the deepest, fastest, sludgiest" music of its career. And based on its title, it has a nautical theme.
If you're lucky enough (!) to be in Sacramento, Calif., Friday, July 8, you can catch the band live at The Blue Lamp.
Read more about Giant Squid here or listen to more music here.
Posted by xokayteamac at 9:37 AM