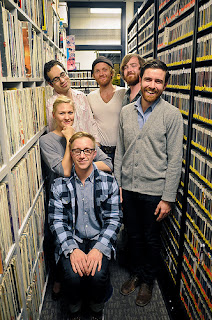 NPR: Song of The Day - "Campfire OK's "Strange Like We Are" grows as it goes, with handclaps and three-part harmonies culminating in powerful choruses." http://www.npr.org/2011/02/11/133682917/campfire-ok-a-song-for-the-strange&sc=nl&cc=sod-20110211
Seattle's City Arts lists CAMPFIRE OK as #2 Best New Band http://www.cityartsmagazine.com/issues/seattle/2011/03/poll
THREE IMAGINARY GIRLS - "a smorgasbord of tasty sounds, slowly-simmered songs, and crackling good production"
ATLANTA MUSIC GUIDE - "To a casual or superficial listener, this release could pass as pop, but more educated audiences that take the time to indulge will enjoy a satisfying secret."
KEXP - "The much newer Seattle folk collective"
FLAVORPILL - "Seattle-area Americana fetishists Campfire OK released their debut album Strange Like We Are last week, a rollicking LP full of handclaps, banjo strumming, and unassuming vocals. They sound a little like Fleet Foxes' younger cousins, and the title track is the kind of tune that's sure to warm you up."
CAMPUS CIRCLE - "Seattle indie pop performers Campfire OK could be the new Death Cab for Cutie or a less ruralized Fleet Foxes. Like those other Seattle-area groups, Campfire OK delivers wounded pop songs replete with temptations, addictions, recriminations, confessions and relationship articulations."
SEATTLE WEEKLY - "Local collective Campfire OK is one of those beautiful, restless entities that don't stay in one place for too long but still manage to write concise, focused songs. Strongly rooted in the raw acoustic roots of the Smithsonian Folkways Anthology series, the band pushes the boundaries of the revival band stigma, incorporating subtle modern elements (synth swells and delay pedals) effortlessly atop the weathered antique frames of their songs"
FENSEPOST.COM - "these guys may be the band everyone says they like, even if they have never heard of them, because of a fear built in all music lovers of sounding like an amateur listener"
SEATTLE P.I. - "The band blends banjo, piano, guitar, horn, drums and more to create an album filled with a wide variety of instrumentation, lush soundscapes and rewarding song structures."
IN TUNE DAILY NEWS - "Eye-opening debut"
REPORTER MAGAZINE - "If you have a paper or a road trip in your near future, consider rewarding yourself with a copy of "Strange Like We Are," and you'll have nothing but smooth sailing."
VERBICIDE MAGAZINE - "The band channels Sufjan Stevens at his most intimate moments - an impression that sticks in all future listens."
IMPOSE MAGAZINE - "This is a pretty damn good album from start to finish with some fairly complex and well-rendered songs that deserve to be heard. Two snaps up on this one."
AMPLIFIER MAGAZINE - "This Seattle band is among a select few, including fellow hometown favorites Fleet Foxes and Band of Horses, who are re-defining (i.e. modernizing) roots rock and Americana in the 21st Century. One day, young bands will want to sound like Campfire OK."
CULTURE MOB - "Campfire OK could be classified as indie-rock, Americana, or folk due to their use of brass, piano, banjo, and acoustic guitar. The result of the arrangement is an elegant blend of piano-and-drum syncopated rhythms, rich melodic lines hinting at despair, and dynamic multiple-vocal stylings."
BABYSUE - "Strange but true, the guys in Campfire OK have much more in common with modern popsters like Sufjan Stevens than Mr. Folds. Strange Like We Are features mature progressive pop tunes with slight hints of jazz. Instead of using canned formulas and familiar phrases, these guys throw plenty of curve balls into the mix...creating a strange hodge podge of modern pop that is difficult to compare to other twenty-first century bands."
SEATTLE P.I. - "They are exquisite crafters of moments, able to take a heavily syncopated bridge into an a capella denoument without losing each other or the audience. They exuded confident fun, and the crowd loved them for it. They're making their way down to SXSW next month and I'll be very surprised if they don't make some large waves while they're there."
THE STRANGER - "While they're every bit as organic as nature-loving artists like Fleet Foxes or even the Moondoggies, Campfire OK are also a bit more complex, involving many orchestral characteristics-sweeping, dramatic piano and perfectly placed blasts of horns."
DELUSIONS OF ADEQUACY - "Strange Like We Are is definitely a mixed bag musically. There are songs on here that blur the lines of folk and ambient which ends up sounding magnificent."
SEATTLEST - "A rustic sounding folk rock band with as much talent as you can come by..."
Posted by xokayteamac at 10:40 AM