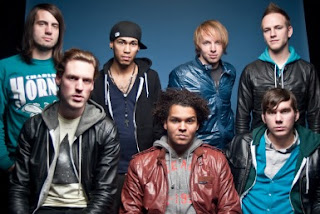 Thousands of Dayton rock fans piled into the Montgomery County Fairgrounds Sunday, Sept. 12, to witness some of their favorite acts at X-Fest 15.

X-Fest is the region's largest rock festival put on by 103.9 WXEG and Live Nation. The festival lasted eight hours and was headlined by Papa Roach, Seether and Shinedown.

Dan Kemer, the vice president of booking and marketing at X-Fest's concert promoter, Live Nation Indiana, said he was pleased to see the bands return to the festival.

"It's good to see some of these big-name bands headline X-Fest consistently," he said.

Sunday was Seether's fifth X-Fest performance, making its members the band with the most X-Fest appearances.

However, Shinedown band members are no strangers to X-Fest either. After making back to back X-Fest appearances in 2003 and 2004, the Jacksonville, Fla.-based band was back to perform this year.

The festival also featured lesser known bands that are making their mark in the rock community, such as American Bang and Paper Tongues.

"We come up with the line-up in January based on who's up and coming and making a lot of noise," Kemer said. "We also try to bring back the bigger names that have done the festival before like Seether."

WXEG and Live Nation have been putting on X-Fest since 2001. The show attracts a large crowd and brings money into the Dayton area, grossing an estimated $600,000 with over 10,000 tickets sold, according to Kemer.

"I think it's always good for an area anytime you get this many heads contributing to something," he said.

Preparations for the show began on Wednesday, Sept. 8. Over 400 people were involved in the production, from handling security, to volunteering and being involved in ticket handling.

Having had customers come down with dehydration problems in past years, the festival provided a free water fountain and had a steady supply of water.

"Keep getting that water in you," he said. "It's hot as hell out here."

Warming the crowd up for the headliners was American Bang, who won fans over with a high-energy set list.

The name American Bang was also appropriate to the band's sound. The group's Nashville, Tenn. roots came through with songs like "Wild and Young" and "Whiskey Walk."

Paper Tongues, who hail from Charlotte, N.C., also got the crowd going with their unique hip-hop/indie rock style.

The band received a mixed ovation, however, when front man Aswan North dedicated the performance of its single "Trinity" "to the troops."

In addition, the festival featured a side stage that acted as a showcase for local bands.

Drawing in smaller crowds were the bands Desallit, Admitted Dilemma and Superkreep.

Kemer said he was pleased with the turnout for X-Fest 15.

"It isn't bad," he said. "These things always come out alright."
Posted by xokayteamac at 10:27 AM