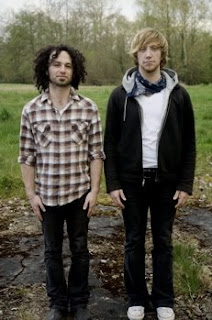 Though the name is Benjamin Bear, there isn’t a bear or a Benjamin among this group. What is here is a deep, almost damning introspection that bends the will of the piano into narrative pathways that is usually assumed by the singer-songwriter with a guitar strapped on. All that remains is dark Ben Folds heady trip that does not depend on easy chorus hooks, but on full verses. They would be “soul” if the word had not already been ripped from its original meaning into a musical one. So I’m stuck with words like “brooding but hopeful” and “holy crap, this is what the Counting Crows would have been before selling out for the Top 40.” The voice of Mychal Cohen interplays with elegant sweeps on the piano to produce gems like “Russ,” whose quick tipped licks reveal a playful and honest confessions about a medical crisis with clever lyrical inversions that stick for days.
Those are the same reasons I like the second track, ‘Posterboy” which also starts in a soft but steady piano beat before plunging into a rocking chorus with jazzy drums provided by David Stern. The surprises that Cohen gives with his piano playing elevates Benjamin Bear beyond a novelty into a surefire creative force.