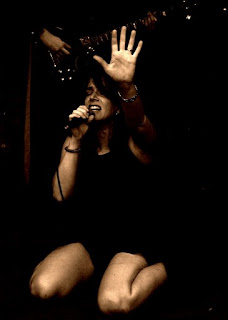 Kim Pendleton is a most dynamic lead singer. She has the pipes to emulate Roy Orbison and an emotive stage presence to make many riot grrls jealous. This flexibility extends from the power pop singles “Wedding Day” and “Typically I don’t Mind,” on which she and Bonner craft winning harmony vocals, to the raucous roadhouse rocker “Fat Girls”. An appealing vulnerability is present at times as well, highlighted on the acoustic ballad “Someone has Broken.” Bonner is an ideal guitarist for the range of material displayed on the band’s latest CD, You’re Welcome. His playing is economical, abounding with tasty rhythm guitar arpeggiations. It also includes occasional lead fireworks and sustained countermelodies that underscore a soaring vocal or propel an interlude into the next verse. Under his guidance, the Backsliders have developed a correspondingly streamlined profile that focuses on excellent music-making rather than the arch careerism that has infected so much modern day rock. We recently discussed the band’s genesis, progress, and new recording.


Interview with Chris Bonner
Christian Carey: Tell me about the beginnings of the group: when did you meet and
begin to work together?

Chris Bonner: Kim and I met in mid 2004. She was the singer for a band called The Shimmers, formerly known as Vibrolux. I came in as the bands bass player, and we started dating soon thereafter. It was kinda inevitable at that point that we would start a group of our own. We began writing songs and played out as The Disasters with various bass players and drummers. We eventually settled on our original rhythm section and recorded our first album which was released in early 2006.

CC: How did you decide on the name of the group? Were you aware of your antecedents?

CB: We came up with the name The Backsliders after finding out that there was another band called The Disasters. Both Kim and my family are fairly religious people, and we go to bars and play ,so the name was a comment on that .We had no idea there were also 5 other bands called The Backsliders. We are much different from those other groups so I don’t feel it is that confusing. Plus we capitalize ours funnily.

CC: The Backsliders are known for tremendous energy in their live performances. How do you translate this into studio recordings of the material you’ve been playing out?

CB: When in the studio we try to keep the live feel as much as possible. Most of the
rhythm tracks and even some of the vocals are recorded at the same time, so that there is somewhat of a live feel. Of course the recordings do lack the sweat and the flailing about, but the listener is invited to add that in where they see fit.

CC: Do you like the music scene in Dallas? What are your favorite venues as performers and as audience members?

CB: We love the Dallas music scene because we thrive on adversity. There are no bands in town like us so that is good and bad. However there are tons of really good bands and good people making it happen. Our favorite places to play are the bigger rooms( Granada, House of Blues), but so much of what we do and who we are comes from the 200 plus shows we have done at the little dingier places. I like to see bands at those places (Double- Wide, Club Dada) ‘cause it’s more up close and personal.

CC: How has Dallas done in the midst of the challenges facing the music business, in terms of record stores, bookstores, and performance venues?

CB: A huge chunk of the cities clubs have closed over the last five years and the main music area, Deep Ellum, is in a pretty dire situation. We have several great record stores; Good records, Bill’s records, CD world. People are still coming out to shows, there is probably just less of them.

CC: Has MySpace been an effective promotional tool for the band?

CB: The most. Myspace is the quickest and easiest way for bands to network and to connect with a fan base early on. If I could have had something like it in early bands I was in I can only imagine.

CC: One of the things I most enjoy about your material is its economy. The conciseness kind of hearkens back to the early days of rock ‘n roll, where singles were even shorter: two minutes instead of three! How did the song “Serves you Right,” a particularly single-worthy one in my book, come together?

CB: Kim came up with the basic melody and lyrics for “Serves you Right”. At first it had a kinda Beach Boys “California Girls” feel. I was listening to the demo of that one the other day and couldn’t figure out how it got to where it did. Usually with us, the more we play a song live the more rockin’ it gets. We just have to pull the breaks before it gets all metal. As far as the lyrics go, I guess it’s just more unspoken hostility on Kim’s part. She’s a pistol.

CC: Would you share back stories for two of your songs: “Fat Girls” and “Wedding Day?”
CB: “Fat Girls” is a song about the various adversities a band faces now,”some kids don’t wanna hear it less you can’t sing, but they don’t buy no songs ‘cause they get ‘em for free”. Kim was nine months pregnant when we recorded it so the title had to stick against my better judgment. It is no way a slam against over weight young ladies. In fact Jason,my brother and our new bass player, is rather fond of them. “Wedding Day” is a love song to my wife written for her to sing about us. I wanted to write something direct and not masked in any way, and I think I did.

CC: You’re Welcome presents an impressive range of moods. I was particularly taken by some of the ballads on the back half of the LP: the one-two punch of “Disguise” and “Love Field” was particularly effective. Would you talk a bit about the sequencing decisions you made for the recording?

CB: You’re Welcome is laid out like an LP. The first side, in my mind ends with “Pass on all your fears”, and the second side begins with “Fat Girls”. I wanted it to feel like a set,like a classic album. Thirteen songs like Sgt. Peppers and the new McCartney album. I can’t see how using that guy as a template could ever lead you astray. We write the songs we write because we like them. We are often criticized for stylistic changes, but I would be bored playing in just one format. Why should bands just sound one way. Even The Ramones mixed it up a bit, and they are known for being so simple.

CC: “Cry” grabs that early rock feeling too; it even has the triplet feel of some of Roy Orbison’s songs. Any interest in this material, or is it coincidence?

CB: We love Roy Orbison. Kim and I wanted to come up with a real vocal showcase as far as the arangement was concerned. There is another version of the song on
a seven inch that we released last year. That one has more of a new wave feel to it. So we did our best to emulate that Roy Orbison/Patsy Cline sound.