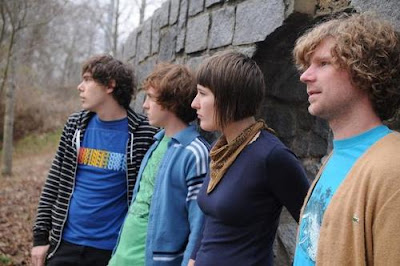 Mike White
Twin Tigers roars at City Tavern tonight.Gotta love that SXSW backwash that brings so many quality bands into our region. Three of these make their way to City Tavern tonight in a show that offers, besides some great music, an odd animal motif.Twin Tigers, Sleepy Horses and Gift Horse all hail from Georgia and all three ply their craft loudly in an interesting shoegaze meets alt-country manner.Curious Faces/Violent Future, Twin Tiger's debut, released last summer, is the best record from any of the bands playing this evening's bill, though--and that's not shafting efforts from Sleepy Horses or Gift Horse in the least. Featuring swirling, psychedelic guitar and tortured vocals, songs such as "Invisible Zombies" and "Golden Daze" sound like Gram Parsons fronting The Jesus and Mary Chain.

Sleepy Horses, meanwhile, actually has some Texas ties: Frontman Nic Goodson began his musical odyssey in, of all places, Lubbock. Goodson's story--a near-death experience and various band personnel issues--doesn't lend itself to a blog post, though. Let's just say that he channels a lot of frustration into his dense narratives. And the band's most recent EP, The Golden Light, lives up to critical praise the band has received on past efforts.Lastly, Gift Horse is quite possibly the most intense band on this bill--and that's saying a lot. Currently recording its full-length debut, the band, led by singer/guitarist Mike Stokes, has a tendency to overlook melody in deference to volume. But such is a small quibble when the results are as powerful as "Both of Me" and "All the Rage."In any case, this is as good of a Tuesday evening triple bill as any slacker is likely to stumble upon.
Tags: City Tavern, Gift Horse, gig alert, Sleepy Horses, Twin Tigers