The amount of chemicals involved in the making of this record... 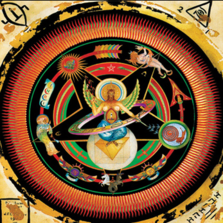 The amount of chemicals involved in the making of this record likely surpasses what is sprayed on America's crops in a year. Talk about a druggy, hazy, murky psychedelic sound orgasm, White Orange has produced a doozy. These guys go beyond mere stoner rock and travel into a new dimension where acid flows like water and giant electric seahorses prance through the cosmos while caterpillar armies bow to colossal bongs. Take a look at the brain-frying cover art to get an idea what the band actually sounds like. This trip is highly recommended to those seeking to leave their body using music. Those looking for tight, crisp songwriting might be advised to keep moving along.

The usual stoner influences such as Kyuss, Nebula and Monster Magnet predominate, but mixed in with some early 90's alt-rock noisiness. The songs are based on simple riffs, but the guitar sounds are warped, woozy and drenched with more effects than showed up in the movie "Avatar". Vocals are slurred and druggy, very rarely conforming to "normal" singing and often referring to acid-psych terms like "set the controls for the heart of the sun" and "incense and peppermints make no sense". Do the songs work? I enjoyed the opening "Where" which lumbers along in enjoyably fuzzy overkill, the almost insanely simplistic "Middle of the Riddle" is ultra-catchy with its singsong nonsense lyrics, "Dinosaur Bones" brings the 90's alt-rock influences into play and "Kill the Kids" is the heaviest, most metallic cut.

Not so hot is "Wonderful", where the drunken vocals are anything but, and the meandering semi-ballad "Save Me". But then I don't consider myself the biggest psych fan in the world. If you are a big fan of 60's and 70's tinged weirdness boosted up to 21st century levels of heaviness, White Orange will likely blow your mind.