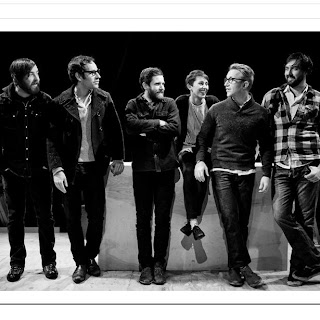 To close out the year for SEAC Coffee Haus series, Capitol Hill's own Campfire OK will be folk-rocking the Student Center Hearth tonight at 8 p.m.

Coffee Haus has been bringing concerts to the students since September to fit the busy lifestyle of music-loving Seattle University students.

"Students are so busy that it can be hard to get off campus to see a show," said Katie Nguyen, the SEAC Coffee Haus chair. "It's cool to have something that you can go to monthly, for free and right here on campus."

An all-ages show in Seattle can be somewhat of a rare gem with bands like Campfire OK, another reason to be excited.

"We really like all-ages things and we've only played one all-ages show in Seattle and we'd like to play more," said Mychal Cohen, front man of Campfire OK. "Younger crowds have more fun."

After playing live shows for about one year, City Arts magazine named Campfire OK "Best New Artist of 2011." The band is slated to play Capitol Hill Block Party this summer as well as Bumbershoot. However, before that excitement even begin, Seattle U students get the opportunity to see the spectacle that is Campfire OK at the Hearth.

Campfire OK is known for being quirkier than your average band, pulling stunts like walking into Oddfellows Café, without warning, to play a set for unsuspecting patrons. Seattle U can expect the same mischievous yet benevolent spirit with the Coffee Haus show. Cohen divulged some intriguing details.

First, he said that contracts with a local music venue are technically supposed to prevent this show from happening.

Second, he revealed that students can expect to hear almost every song from the record "Strange Like We Are," and possibly some songs that aren't on a record yet.

"I think we're planning on playing some new stuff too," Cohen said, "because we're making another record in October. We've started pre-production, which means that we have a bunch of new songs up our sleeves."

Third, Cohen pointed out some humor in the fact that they are playing this show because he was kicked off the Seattle U campus in the past.

"Half [of ‘Strange Like We Are'] was written on campus," he said. "I would go into your music building. I've never been a student but I would always walk up and ask for the piano codes and they would give them to me. I would sit in your piano rooms from 7:30 a.m. until like, 9 a.m. when it started getting busy. I was writing all of these songs in there, until Seattle U police came in and kicked me out and banned me from campus the rest of the year. Banned me!"

Cohen reassured that his ban has expired, but the idea of him getting chased around the Hearth by Public Safety officers is certainly a possibility that would make going to the last Coffee Haus show worthwhile.

Of course, that's only if the promise of awesome music doesn't make you want to go already.
Posted by xokayteamac at 2:10 PM