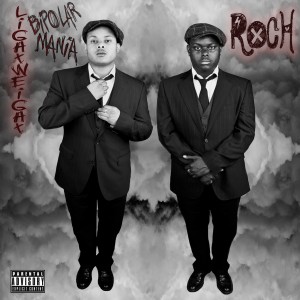 I listen to more rap and hip-hop than the reviews posted to this site might reveal. Yes, I know that’s rather cliché for white, in-the-know music critics like myself to wax eloquently about the sort of beats they enjoy and the sort of lyrical flow and content they might prefer, but I’m not interested in building any sort of street cred. I know what I like, and I can talk about it rather plainly; thus, when I first heard the music of Roch, I found myself alternately bemused and impressed by the confusing conflagration of swagger and introspection that besets Lightweight Bipolar Mania.

In one sense, being boastful and prone to over-exaggeration is simply part of the rap game. If you want to listen to some sad-sack moaning about how pitiful his life is, it shouldn’t be difficult to locate a couple handfuls of white-bread folkies somewhere on a street corner in Austin, TX or Portland, OR. Yet, what Roch brings to the game is the sort of sarcastic, snarky, self-aware lyricism that Kid Cudi and Wale have made popular in the past couple of years. There are also strains of the “serious” hip-hop preferred by conscious rappers like Common and Mos Def, along with the wacky-yet-arty concept-driven rap preferred by Andre 3000.
When this youngster is on his game, the bass is big and strong, the guitar fills are interesting, the samples sound fresh, and there’s plenty of energy on the mic. We can be hear this specifically on the title cut (which serves as the album opener), “Hard Times,” “No More Starz,” and “Visionaries.” However, things lag on tracks like “A Beautiful Curse,” “Another Heartbreak,” “Dracula’s Wido,” and “Nothing,” as things become too chill and Roch leaves behind his strong mic skills in attempt to sing a bit and display some wannabe rock/soul angst.

As I indicated in the first paragraph, the album’s title is rather spot-on in its description of its contents. There is a distinctly bipolar/split personality that dominates the aesthetic: you could call it rap and hip-hop tussling with soul and R&B, or a contemplative dreamer fussing with a braggart. As much as I appreciate Roch’s ambitions and aspirations, his record comes across as a rather tepid homage to Outkast’s hit-laden (and also rather conflicted) Speakerboxxx / The Love Below double album. The kid possesses talent, but he doesn’t quite have the chops or the scene cachet to effectively pull of a heady concept album so early in his career; thus Lightweight Bipolar Mania unfortunately missed the mark. Much like Wale and Kid Cudi hit speed bumps with their respective major label debuts after releasing well-received self-released mixtapes, Roch needs to focus his considerable energy and ideas in a consistent direction in order to best display his abilities.
Posted by xokayteamac at 2:07 PM