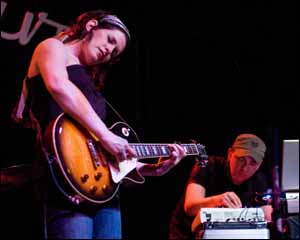 IN A radical departure from her folky upbringing, singer-songwriter Stephanie Schneiderman has recorded an electronic album.

Under the influence of trip-hop producer Keith Schreiner, she has made Rubber Teardrop, a record brimming with bass and pulsating drums.

From her home in Portland, Oregon, Stephanie told the Jewish Telegraph: "The whole thing was a really interesting experience.

"My last album, Dangerous Fruit, was a departure and having gone through that experience it informed my thoughts for this one."

Her latest long-play effort Rubber Teardrop, builds on those experiences and she admitted that Keith was the guide on her journey into electronic music.

For an Oregonian who was raised listening to the likes of Simon & Garfunkel and Fleetwood Mac, drum and bass was a radical shift.

Tipped as one of the stars of the Portland music scene, Stephanie said: "When I sat down to write this album, I wrote with those experiences in mind.

"In that way it became a little easier and made a lot more sense to write how I have done."

Referring to her producer-cum-mentor, Stephanie said: "We found our stride together on this album."

Stephanie is hoping that Rubber Teardrop will offer her "a step toward strengthening my international exposure".

She added: "There's been some really positive feedback in the US - bloggers and reviewers have said some great things about it - but hopefully things will start to happen in the UK and across Europe as well."

Stephanie, whose music is set to be featured on the USA Today website, said that she "stepped very far out of my comfort zone for this record. It was Keith's vision that carried the album through and the songs benefit from that.

"The whole process was really interesting. It was a case of throwing caution to the wind and I'm really happy to have made that choice."

Over the last few years Stephanie has developed a professional relationship with 80s rock star Dan Reed - who spent three years studying at a yeshiva in Israel.

Stephanie and Dan have spent time touring together and he has played a role in helping her gain international recognition.

She said: "We met through Keith and because of the music I've been creating recently. In Portland he effectively led the electronic music scene.

"He liked the stuff Keith and I were putting together so he wanted to get involved."

Stephanie has nothing but praise for Dan. She said: "He's such a generous soul and is so supportive of what we are doing. His label has helped in promoting the album in the States and the UK and he helped me get a distribution deal."

Despite her recent foray into electronic music, she admitted that singer-songwriter Elliott Smith has influenced her music.

Smith, who committed suicide in 2003, spent much of his adult life in Portland and is widely regarded in the city.

Stephanie said: "He's my favourite artist. I live, as he did, coincidentally, in north east Portland.

"Everybody in the city is influenced by his style. The sounds that we produce go back to his legacy."

Rubber Teardrop is Stephanie's seventh solo album, while she has also collaborated on two albums with girl group Dirty Martini.

Her latest album was actually funded by her loyal fans. She launched a Kickstarter campaign web page asking for fans to invest in the album - and within 48 hours she had achieved her target.

Multi-talented Stephanie has also enjoyed success as an actress. A role in Men of Honor, starring Robert de Niro and Cuba Gooding Jr is just one of her achievements.

Featuring 35 artists, the charity raised $70,000 for Mercy Corps in Uganda.