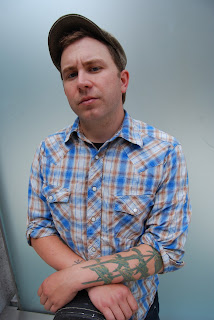 Listen if you like: Raw blues, Appalachian folk, punked-up bluegrass, Bloodshot Bill, Devil Makes Three, Hillstomp, an acoustic, stripped-down The Black Keys.
First impressions: A one-man band fronted by Portland, OR, native Trevor Jones, Poor Boy’s Soul kicks out some of the meanest, grittiest blues and folk jams known to man. The music is simple, but the simmering power of the opening title track quickly gives way to the raucous, throat-shredding insanity of “Movin’ To The City.” Inspired by Jones’ time spent hopping trains around the United States, the song delivers a unique vision of America that could have been made in 1931 or 2011.
The nitty-gritty: Since I’ve never seen him live, I can’t speculate how Poor Boy’s Soul would measure up with Canadian one-man band phenom Bloodshot Bill, who I caught in Orlando back in November. But suffice to say that the intensity of one man shredding a slide guitar while stomping out beats on a rudimentary drum kit is best enjoyed in person. Take “Nails In The Pine,” for instance; the enormous skill required to play a song that fast while playing two instruments and singing sounds impressive on record. But the sweat and spit and hellfire doesn’t come flying at you from computer speakers. In addition, that short track, along with the brief but swaying “Throwing Stones,” are nice contrasts to the five-minute-plus openers.
Other recommended tracks: “Ain’t Comin’ Back Any More” creeps and crawls like a snake in the grass, while “54 Ways” injects a bit of down-home melody into Burn Down’s otherwise gaunt, sparse 30-minute running time. Yet the seven-minute “Annalisa” is the most impressive and the most confounding offering from Poor Boy’s Soul: a slow-moving, fingerpicked ballad that lacks most of Burn Down’s early energy while still proving that Trevor Jones has more than just roughshod blues chop up his sleeve.
East Coast tour dates? None as of yet; stay tuned to www.PoorBoysSoul.com for updates on when Trevor Jones is riding the rails to the Rightside. –NM
http://www.easternsurf.com/vitalreverb/010512/
Posted by xokayteamac at 12:32 PM