Influences are front and center for stoner rockers Black Pussy 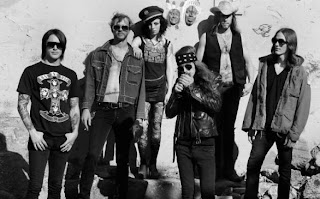 By Doug Simpson
Influences are front and center for stoner rockers Black Pussy. The band’s half-hour, debut long-player, On Blonde, is dedicated to Brant Bjork (Kyuss and Fu Manchu), and it’s clear Dustin Hill (who also plays in likeminded White Orange) and his cohorts worship the ‘90s hard-rock template Bjork helped to create.
Post-Sabbath riffs with psychedelic overtones abound from openly anthemic “Marijuana,” (with appropriate bong hit sound affects), to the four-on-the-floor beats and fuzzy guitar, which populate “When All the Indians Are Gone Who Will Bury the Chiefs?.”
The prerequisite wah-wah that wafts through the weaving “Swim,” and the pedal-to-the-metal drive of “Blow Some Steam Off” evokes Queens of the Stone Age’s first album. Not everything is golden as special brownies, though, as the overly-baked but undercooked “Indiana” goes on far too long: more hedonism and less meditative groove might have been an improvement (the Bevis Frond never sounded this lethargic, for instance).
On Blonde is currently available.