Non-etre­ is an interesting creation torn between two personalities. 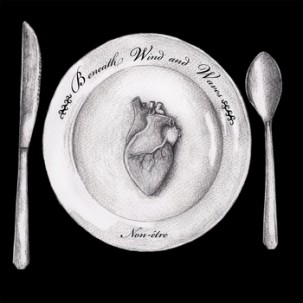 by ellen
Non-etre­ is an interesting creation torn between two personalities. The folk-pop mix is a difficult endeavor that when done well can be quite enjoyable, but it is much harder to achieve than most realize. Beneath Wind and Waves certainly strives for this balance, succeeding at times, yet falling short more often. Lyrically, the album expresses a search for self during and after a serious, identity-defining relationship. So it fits that its musical counterpart seems to also be searching for an identity, caught between the rhythms and harmonies of folk and the melodies of pop –a battle which finds neither an ultimate victor nor armistice. There are moments of musical creativity and lyrical depth, however these are sparse, and their simultaneous existence is fleeting. Shawn Lawson Freeman, lyricist, digs for truth and clarity in the chaos of self-searching, and reaches for insightful introspection, opening up to the audience in the third track, “To Be Special,” with lines such as “you’re not much, but you’re all you think about; the eyes see, but they never see themselves,” but then immediately takes away from its poignancy and hides behind walls of clichés with lines like “the ears hear, but they never hear themselves.” Freeman is grasping for clever poetry and poignancy but only manages to scratch the surface. This album has its strong moments, but is overall a struggle for inventiveness and ingenuity, obscured by familiarity and clichés.
Review by Caroline Wuertz
Posted by xokayteamac at 11:23 AM