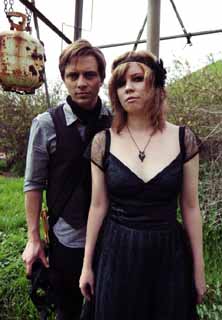 Hello Brothers and Sisters .Come down from the mountain and settle in with the real folk. Roll Dem Bones and scrape the shit off your shoes. Relax and settle in with the space age jet set sounds of Magnuson….and remember we heard of them before you did………………
Introductions are boring.. Listen to the music-discover for yourself. First and only clue-they are a two piece...
1. What are your backgrounds musically? - We both grew up in musical households and had a love of learning how to play different instruments. Greg’s mother was an opera singer, Kyrsten’s mother played keyboard in cover bands. Music was always around and it just felt natural to start playing as well.
2. Seems that because you are a two piece people like to compare you to The White Stripes although your music is

quite different. How do you feel about the comparison? - We get this comparison frequently, but it is definitely a compliment. Jack White is a brilliant writer & musician and Meg’s almost childlike approach to the drums just fits in perfectly. They had something different and special and they’ve definitely changed the way people perceive a two piece band in general, not to mention the fact that it was a guy/girl two piece!
3. Was there ever consideration to have more people in the band? - We actually started as a 5 piece and played for many years as a 3 piece. While we enjoyed those configurations, it was time for something new. We both love playing drums and guitar and always dreamt of playing in a band where we could switch off, so we decided to give it a try. We have so much fun and get such a great response as a 2 piece; I don't think we'll ever add more members. Plus now we only have to take one car!
4. Who are some people that have influenced you musically? - Muse, Porcupine Tree, Death From Above 1979, Dead Kennedys, The Smiths, Kent, Opeth, Meshuggah, Radiohead, The Beach 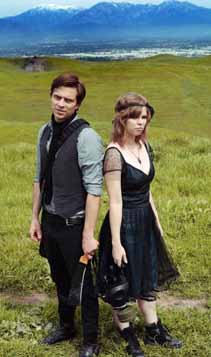 Boys
5. Another frequent comparison is to Black Sabbath. Do you think this comparison is accurate? - I see what people mean, but we only nod our hats to them on a few songs. Other influences come through in other songs, but we appreciate the comparison! Sabbath was a game changing band.
6. How has the band evolved over the years? - Initially, Greg started this project as a solo acoustic act. Then, other members were added to fill out the songs. Kyrsten joined as rhythm guitar initially and then made herself indispensible with her vocal skills. After experimenting with different lineups (including about 8 different drummers), we finally decided less was more and stuck with the duo.
7. What are the next steps for Magnuson both in the recorded sense and touring? - Well, the first step is the official release of our debut duo album "Crash of Cassini" on July 16th. After that, we'll be touring locally with a focus of expanding our territory. Greg has been in Sweden for a month working on a reality show that will air in September and the album has gotten some amazing feedback there. Depending on how things go, a Swedish/European tour will follow next spring. Then, we'll hopefully begin recording the next album!
8. A question that seems to come up often. Are you related? - Or is this one of those world secrets guarded my evil midget minions? Well, it’s kind of funny because that's another one of those White Stripes things. For the record, we are not brother and sister, we're married. But that won't stop people from their speculating. ;)
9. Are you familiar with other two piece 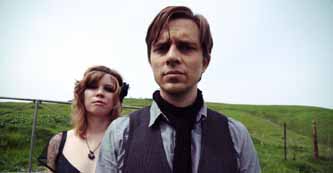 bands from the past –The Flat Duo Jets or The Leather Uppers? - We haven’t heard of those bands, but we’ll have to check them out! Our current favorite duos are Death From Above 1979, Blood Red Shoes, The Black Keys and Middle Class Rut. They all have such a great full sound for only having two people and we definitely look up to them.
10. What have been your most memorable shows? - The Troubadour in West Hollywood is definitely our favorite show thus far. So much history and energy...it was magical. Besides that, Payette, Idaho was the best tour show. We played our set twice because the crowd couldn't get enough and a lady started stripping on the dance floor. So crazy!
11. Do you have groupies and do you exploit them for alcohol, drugs and sex? - We are each other’s groupies…but we make excellent wingmen for our friends & fans!
12. Are 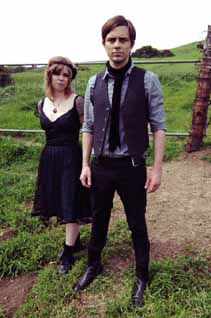 there any current bands you would like to share the stage with? - Opeth, Muse, Dirty Projectors, Givers, Passion Pit, DFA1979, Foo Fighters...
13. Would you consider doing a Sonny and Cher type variety show if offered? - This would be the best thing ever. We'd do it in a heartbeat.
14. Where do you see Magnuson in ten years? - Hopefully enjoying the success of several world tours as well as having a catalogue of numerous film soundtracks and possibly an art film based on our music. I'd also guess we'd be starting to add the next generation of little Magnusons to the band at that point…Partridge Family style.
15. What guitars/amps/gear do you use? - Randall 50 guitar amps and Eden bass gear. We play Brian Moore guitars which we run through a Roland guitar synth and various other pedals. For drums, we have a prized 2 piece DW kit with a custom snare, DW hardware, Zildjian and Paiste cymbals. Mics are Sure beta 58s.
16. Would there be anything about the current release you would like to change? - This album was particularly a challenge because it was our first duo album. We wanted to make sure everything sounded the same on the album as we play it live, so lots of changing little parts here and there to make sure it sounded nice and full. We also cut a few songs for the sake of the "album", but maybe those will resurface as bonus tracks one day. As it is though, we’re really happy with what we were able to put out on such a limited budget and can’t wait to record the next one!