Not Unknown Anymore:: INTERVIEW with THE GREAT UNKNOWNS 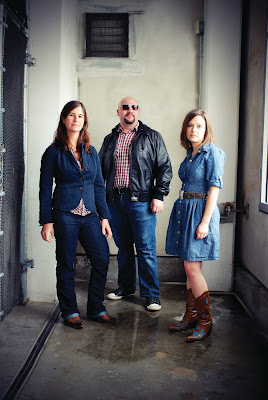 Was greatly surprised to find this DC band in my inbox last week. This never happens… my first impressions sent me searching and googling this band known as The Great Unknowns. Why is it that brilliant albums comes from such heartache and sorrow? Read below this wonderful interview with the lovely Becky Warren. And yes a band can pick up where they left off The Great Unknowns proved this!

Would love to start by getting all your personal influences?

Genres: Americana - "alt-country, AAA, rock"
Most Telling Tracks - Lexington, Homefront, I Wish I Was The Girl I Was
For Fans Of - Lucinda Williams, Kathleen Edwards, Amy Ray


If I made a list of all the great artists that have influenced me it would go on for pages, but the artists I listened to most often for inspiration when I was writing this album include Lucinda Williams, Bruce Springsteen, Kathleen Edwards, and Steve Earle.
Thinking back to early childhood, what was your first experience with music for the first time like? What song do you remember most as a child?
I remember singing from the time I was very small, and the earliest songs I remember writing were inspired by the dog I got when I was nine years old. The first songs I remember are the ones my mom sang to me when I was really small, especially “Love Potion Number Nine”.
What made you first realize you wanted to pursue a career in music?
In high school, I began to realize that listening to and playing and writing music felt so much better to me than anything else, so I looked for a college in a good music town. That’s how I ended up in Boston. I was really lucky to meet a lot of incredibly talented musicians in Boston, including the other Great Unknowns, and the fun of playing with them made me want to continue to pursue music after college.
I notice you took a long break? Tell me about what you all did in this “break” time. And who pushed the first let’s do this again…..
I moved from Boston to south Georgia and then again to Washington, DC. I got married and then my marriage fell apart. Altay (bass) moved out to San Francisco and got involved in the startup world. Andy (drums) finished a PhD, got married, and moved to London for a great job. When my marriage ended, I started writing again, and I started talking to Altay and Andy about whether they’d want to try to get together and record another album if I wrote an album-worth of new songs.
Many would say you all had success as a band and yet you were able to walk away. Would love to hear from you on what defines SUCCESS.
Yes, I definitely have some regrets about walking away! Music really occupies an important place in my life; there are a lot of songs that have been really good friends to me at difficult times in my life. Success to me would be writing some songs of my own that can do that for me and for other people.
Why Washington DC how did you all end up there?
Actually, we didn’t all end up here; we’re still a little spread out. I moved up to DC because I liked the city and it had a lot of good jobs for my then-husband. As I was writing songs for the record, it became clear that Mike, who played guitar on our first record, wouldn’t have time to play with us on a second record (he was working on Martin Scorsese’s George Harrison documentary). So our friend Avril was the obvious choice to join the band on guitar, both because she’s a phenomenal musician and someone we already loved spending time with, but also because she lived in DC too, which had the benefit of putting half the band in the same town, finally. Andy is still in London and Altay is still in San Francisco. We’ll have to find a new drummer soon (unfortunately!) and we’re looking for someone local to DC. 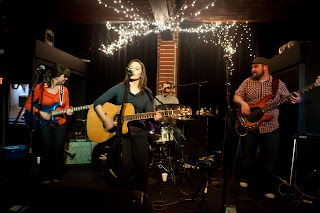 How did you settle on the album name “Homefront”?
I mentioned earlier that my marriage fell apart during the band’s “break”—this was because my husband returned from Iraq with PTSD and it put an enormous strain on our relationship. A lot of the album is about that experience. And the thing is, what happened to us is unfortunately not at all unusual. It’s happening to thousands of Iraq and Afghanistan vets and their families. So I knew I wanted to write a song that wasn’t about my personal experience, but about the experience of a solider I don’t know returning from Iraq and struggling with reintegrating into a country that often doesn’t feel like it’s at war. In that song, the veteran realizes that there’s no real homefront for him, and asks his wife to be the homefront that he needs. I don’t think it’s fair that we’re often leaving it to families to play that role for our country. That’s where the title comes from.

Did you get to record with all the equipment you wanted? Any wish lists on gear?
We had a fantastic recording experience. We recorded at Bias Studios in Springfield, Virginia (http://www.biasstudios.com/). I guess if we had the money to afford it we might have recorded on tape instead of digitally but I really don’t have many regrets about the recording process. Except that I wish we had more accordion. I always wish we had more accordion and I always get outvoted by the other guys in the band.
Any tour plans? If so what can people expect to see at your live performance?
We’d really love to tour and I hope we’re able to. We’re a totally DIY band right now and the process of getting the record out the door and to radio stations and bloggers and other people has been really time-consuming and expensive. So we can’t afford to tour right now in a way that loses money and unfortunately, it’s hard to string together a tour that makes money if you’re a band the size we are! Hopefully we can hook up with a larger band or get enough interest off of radio play to book some dates in venues that will cover our touring expenses.

Who would be your dream tour co-headliner? Dream tour vehicle? Dream tour rider?
Hm. I guess because of the subject matter of the album, a dream gig would be a USO tour of Afghanistan so the dream tour vehicle would be a C-130. But I’m not sure how easy it would be to talk the rest of the guys into this.
What is the wildest story with the group?
Maybe this is going to ruin our street rep but we’re not that wild. For sure the most surreal and amazing thing that’s ever happened to us was getting to tour with the Indigo Girls. Their fans are phenomenal and so supportive and we got to play in some ridiculously great venues.
upcoming shows:
http://www.facebook.com/greatunknowns
http://www.youtube.com/user/unknownbecky
https://twitter.com/greatunknowns
http://www.greatunknowns.com/

Posted by xokayteamac at 7:01 AM