Seattle, US is home to indie folk-rock act Campfire OK and they are starting to build quite the momentum! Even on G&C they’re a top 3 most listened to artist! As you all know by now, G&C Q&As bands from all over the world to see how they’re embracing the digital age. 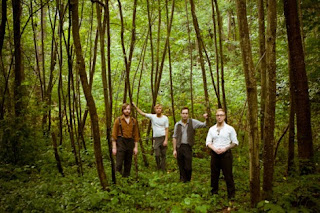 “The truth is, if you value your own music and charge for it, people will pay.” Mychal, Campfire OK

Thanks for taking time out for us! Tell me how you guys got together? What is it for you that makes you want to play music as a career?

We formed as a band after I (Mychal) accumulated a collection of songs and needed musicians to play the instrumentation. I was lucky enough to meet very talented, interesting musicians with great ideas. We all met each other mostly by happenstance through friends of friends. We all want to play music as a career for many reasons. Some are simple reasons that compel any one to do anything. We all like to travel, meet new people, have weird experiences and give people a way to escape their day-to-day lives by coming to our shows and listening to our records. We also play music as a career because we have to. I’m not saying anyone is holding a gun to our heads, but we all feel a responsibility to ourselves to play. We have simply done it our whole lives and will continue to do so until we can’t anymore…


How do you cope with the fact that not everybody wants to pay for digital music? With physical sales on their last legs do you think we’re heading towards a world of free?

Absolutely not. People take things for free all the time. It has been happening ever since the financial system was unrolled. Rather than cope, we have to adapt. We have to play by their rules. How? we shall see If someone wants to get our music for free, all I ask is that they come to our show, bring friends, and tell their friends to buy a cd. Obviously we need to make money. We all live in a financially driven world. The upside to this unfortunate predicament is that there are people who pay for our music. There will continue to be people who pay. If we ask for support, they will give it to us. The truth is, if you value your own music and charge for it, people will pay. It is actually pretty liberating!

With programmes such as Spotify, We7 and Google Music servicing cloud-based platforms this is going to eventually result in a lack of ownership. Do you see anything good or bad with the idea?

I don’t know much about these sites, but with the minimal amount of research I did, they look just like Pandora. With that in mind, I think they are great. More people can listen to our music all around the world. I don’t see how it could result in a lack of ownership but maybe I am just being narrow-minded. These programmes are yet another tool to help us achieve what we want. We just need to start looking at them that way.

What are your skills like on social media and analytics (band camp etc)? Is there some sites you feel are more useful than others?

Our skills are only getting better on social media sites. These sites are great. It gives people a chance to connect to artists like they couldn’t before. They are great tools for creating a buzz and letting someone know where you are. I think that the main sites like twitter, Facebook, bandcamp, and even the more outdated like MySpace are great. We use all of the above whenever we can. Letting someone know about a show on twitter is seriously the most useful thing ever. People spread those posts like wildfire.

Completely agree and the best bit is digital wildfire is free! Sticking along the lines of promotion, it is a given most bands will have to tour more to generate income. Do you find a necessity to tour more of a bad thing?

With such programs as you stated above, and that fact that lots of people download music for free, I feel it is a necessity to tour more to make an income. Most bands this day and age make most of their income from merchandise. T-shirts, bags, sweaters or whatever is where you make the bulk of your money. It is difficult to say if touring more is a bad thing. Some bands are simply stifled from being on the road playing the same songs every night. Look at Radiohead after they toured on OK Computer. Thom Yorke had a very difficult time getting out of a writer’s block. Lucky for them, Kid A showed its beautiful little head something like 4 or 5 years later. But then you have bands like Dave Mathews Band. They have been touring constantly since the 90′s and that has not stopped them from putting out new material. Do I feel touring more will be a bad thing for me? No.

With the digital age giving access to bands more than ever before, do you think the lack of mystery has had a damaging effect on bands? There seems to be a lack of true rock stars such as the Keith Moons etc - do you have any thoughts on what happened and why this is?

First off, I think this is a killer question. I think that for some bands the digital access is damaging for the amount of “mystery” they have surrounding them which usually reflects poorly on them as a group. But that is their fault. So many bands just want to tell everyone what they are about and what they are doing every second of the day. You can’t do that and still have mystery. It is simple, don’t blow your cover! Keep some secrets. Keep some dirty, filthy secrets. Then once you are huge and famous, tell one person on the street and start a fucking rumor about yourself. Then deny the hell out of it. Dorothy Parker (1893-1967) once said “I don’t care what anybody says about me as long as it isn’t true.”

Haha, I like that quote! And lastly, how do you obtain most of your music?

I actually buy my music! Digital, physical, however.