Based in Portland, OR, Prize Country's music is reminiscent of early 90's Hardcore with definite punk influences. 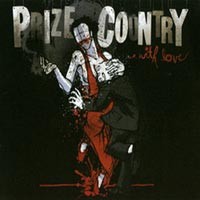 Based in Portland, OR, Prize Country's music is reminiscent of early 90's Hardcore with definite punk influences. Members of Prize Country are currently Jacob Depolitte (guitar, vocals) and Aaron Blanchard (guitar, vocals). Prize Country recently ended a tour in April, completing 16 dates, making stops in Nevada, Utah, Arizona and California. One stop included a show in Las Vegas. Their set consisted of songs off of their newest album, “With Love,” released in 2009, including the one featured on this show, “What We're Made Of.” Prize Country has several releases including splits with the Loom, Traindodge, Sirhan Sirhan, and Hostile Combover.
Posted by xokayteamac at 10:49 AM