Just don’t be a dick and you'll have a good time: Interview with The Supplement 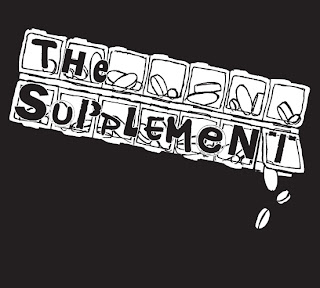 Would love to start by getting all your personal influences?
Having grown up in in the eighties I was exposed to the usual rock bands like Kiss, The Who, Led Zeppelin, Van Halen, Ted Nugent etc.  But early on I saw Iggy Pop live and it sparked my curiosity to search out alternatives to the usual music that local radio was playing.  I had seen most of these bands live but none had the rawness and stripped down over the top energy as Iggy.  And his songs were frkn great.  He threw his entire "being" into his performance too the point of self injury.  It was definitely the hour that changed my life and the way I would view rock and roll forever.   Unfortunately for me it took about twenty years to find three other guys that felt the same way.
Thinking back to early childhood, what was your first experience with music for the first time like? What song do you remember most as a child?
My parents bought me a cheap guitar at about age six.  Soon after my cousin Matt taught me to play the opening riff from My Best Friend's Girl by The Cars and I felt very cool!
What made you first realize you wanted to pursue a career in music?
There’s always been an undeniable need to play and write music.  A career in music is an extension of what I love and need to do.  First it's about writing songs that get me inspired every time I play them.  That’s the true need.  Then everything else just seems to follow in step.  I feel the true gift at this point is to have found 3 other guys that feel the same way and allow me to air out ideas.  For instance, The Supplement writes lots of songs but only records and puts out songs that we feel have to be played and have to be heard; songs that have meaning but at the same time are exciting and fkn great live.  In the process of elimination if one band member says he doesn’t feel it then that song is never played again.  And at the same time we will not release a CD unless every song is worthy…no fillers.
I notice you give yourself the genres Detroit Rock, So-Cal Punk? What can you tell the readers on what those genres are about?
Well bands like The Stooges and The MC5 are arguably the founding fathers of punk rock.  From them we mix guitars that are stripped down and straight forward.  Same with the vocals.  No effects, not even reverb usually.  The riffs are cutting and undeniably high in energy.  From So-Cal we blend the ever prominent snare drum and searing melodies.   From both genres you get the testosterone. You also get the "from the heart" lyrics which usually involve some pretty heavy subjects.  The lyrics are meant to involve the listener and give them something to grab onto in a personal way.  To the Mourning was written to inspire those dealing with the death of a loved one.   Sinners and Sons is about overcoming the realty and struggles of personal imperfections to succeed in love.  Heroes tells you to be your own master and to rise above.  A few of the other songs really hit home with the subject of political injustice, etc.. 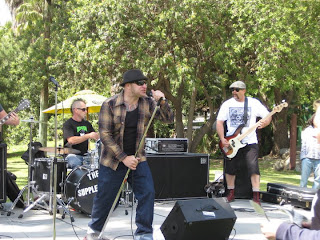 Does your culture aka punk define the way you live your life?
For me "punk" has been an avenue to be myself and accept myself for being different than everyone else as well as to accept all others.  I find a very "free" environment in the punk community.  For instance, as a teenager, punk wasn't accepted in .  You would get beat-up for being involved etc.  But I would search out underground clubs and have the best time.  No one cared what you wore or your ethnicity or even sexual preference.  That holds through today.  We can play a beaten down warehouse on the LA skid row with hundreds of punks and feel much safer and more welcome than playing the Sunset Strip.  Good luck getting someone to help you carry your gear at The Whisky or the Roxy.  Those clubs even charge the bands for parking and don't even think about free drinks.  Most of the crowds at these places are typically too much the musical expert to enjoy a good show.   But… a real punk show will go off no matter where.
Do you think the public has a stereotypical view of punk?
Probably spikes, boots, mohawks, snot and anti-social acts.  But really punk's about community and expression.   It's just like a lot of other genres of music, they all seem to have their stereotypes and extremism.  But everyone is welcome at a punk show, just don’t be a dick and you'll have a good time.
What do you think about the ska trend that seems to influence punk?
Love ska.  It's a gift to punk.  It brings in a lot of other musicians and fans to what we do.  It's also another tool or variation of rhythm that can be used in song writing etc.  Some of my favorite gigs have been with ska bands.  Their upbeat energy blends really well with what we do.
The Mighty Mighty Bosstones are great example for a band that mixes ska and punk influences.  We were also lucky to have had their front man Dickie help work out some of the vocal phrasing on Raise Your Glass which is our attempt at the ultimate drinking song.  Pretty sure Budweiser will be calling any day!
Your genre is known for producing its own media: Fanzines, radio shows and record labels… got any favorites you follow/read/listen to?
Regular radio pretty much sucks.  Go online and listen to College radio like WMBR and The Late Risers Club or WRUV etc.   But I do like Joe Sibb's Complete Control here in which also has a webcast, and Eric Stringer on KXLU.  Pandora has been a great source for new music.  As far as the labels I guess Fat Mike's Fat Wreck Chords would stand out along with Tim Armstrong's HellCat and Joe's Sideone-Dummies.    There are a lot of great blogs on the web with interviews and mp3 feeds…Punk Rock 77 Thru Today, PoDunk radio…and so on.
Oh I can't forget No Front Teeth records in the .  They recently have been kind enough to release a special edition The Supplement s/t in .  The artwork is really great thanks to Marco!
How did you settle on the band name?
The Supplement was Paul's idea.  We all agreed that it was nice and simple but had a lot of applications, you can use your imagination…. 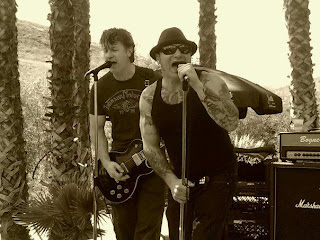 Any tour plans? If so what can people expect to see at your live performance?
High-driving energy.  We play to the point of breaking down our instruments and to the point where we can't speak afterwards.  Nothing is left behind.  It's exactly what musicians shouldn’t do.  We will definitely be playing the South West again by March and since the Cd release the invites are steadily coming in from around the country.  It was our goal to record our next release prior to leaving home, I guess time will tell…But I'm dying to get back into the studio and we have the songs.
Who would be your dream tour co-headliner? Dream tour vehicle? Dream tour rider?
The Stooges, anything larger than a van and Fat Burgers…with cheese.

What is the wildest story with the group?
That we are still together after a year and people give a crap about what we are doing,
If jack helped you off your horse would you help jack off his horse?
Is there beer involved in this story? Jaeger???
Anything else you want to say, rant, comment, complain about?
You gotta picture of the horse?
http://www.facebook.com/pages/The-Supplement/115969118478866?v=info
http://www.myspace.com/thesupplementrocksla
Currently on Pandora, Last Fm, I-heart Radio, Zune, Spotify (any day) and many other digital sites:
http://www.itunes.apple.com/us/album/the-supplement/id480294898/us/album/the-supplement/id480294898
http://www.cduniverse.com/productinfo.asp?pid=8638388
http://www.interpunk.com/item.cfm?Item=197751&
xo kaytea
Posted by xokayteamac at 10:52 AM