underneath techno’s pulsating efficiency, there’s room for humanity: some skin, some sweat, some blood 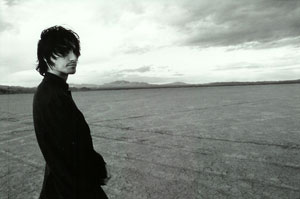 Reviewing what’s essentially an album full of X-laced club music is, for me, a tricky task. I’m familiar with artists that draw on the genre for inspiration and eclecticism—Crystal Castles, Fuck Buttons, etc—but I’m not a club scene regular; my idea of a wild time is drinking a pot of coffee, strapping on padded headphones and trying to pick out the unintentional tempo lags in an Electric Wizard song. The last time I was in a club, I was carrying three Jack and Cokes at one time and punched a guy for asking me if I was “triple-fisting.”
So I’m not an authority. But I’ve spent enough time with Homestarrunner.com and action movies set in Russia to know the crappy version of this stuff when I hear it, and Gunslinger ain’t it. Sure, the songs are rife with tried-and-true genre templates—sternum-rattling digital bass thumps, high-pitched laser beam wankery—but there’s actual structure here. Tracks rise, fall, and swell with purpose rather than simply service the timing of a doubled strobe rate, and the whole thing is rounded out rather nicely with some surprisingly slick space-age fuzz melodies (“Words”) and cyber-soul vocals.
Look, this kind of thing is generally an easy target, and if you don’t already dig cage dancers and deejays with flashlights attached to their temples, Gunslinger isn’t going to coax you to the dark side. Then again, this isn’t meant for you. It’s meant for those of us who want to believe that, underneath techno’s pulsating efficiency, there’s room for humanity: some skin, some sweat, some blood. Believe.
Posted by xokayteamac at 10:04 AM