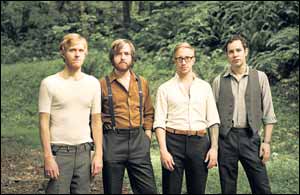 SOME people may think being eccentric isn't cool - but a band hailing from the city made famous by Kurt Cobain are changing that.

"His spirit - and music - is everywhere around Seattle. His old home is two miles from mine."

Campfire OK's debut album, Strange Like We Are, which will be released in February, describes the band perfectly, according to 27-year-old Mychal.

"I am a strange human being, but so are my friends.

"Campfire OK is all about being quirky, but that is alright, it is cool, we don't have to be outcasts."

Brought up in Phoenix, Arizona, Mychal was surrounded by music from a young age.

His mother is a pianist and by the age of 12, as well as the piano, Mychal started to play the bass and engross himself in different genres of music.

Mychal said: "It has never occurred to me that I would be doing anything else but music.

"Some people, they don't know what to do, but I always wanted a career in music.

"Over time it became really obvious that it was going to be my life."

Listening to the likes of Annie Lennox, Cat Stevens and The Beach Boys, Mychal was heavily into jazz by his mid-teens.

He played in jazzesque type bands throughout high school and college, before moving to Seattle six years ago, as he wanted to get out of Arizona.

But Mychal struggled to establish himself in his chosen career and worked at various times as a mortgage broker, a sushi chef, a bartender and a motorbike mechanic.

However, his life took a turn for the better two years ago.

While playing in a two-piece band, Mychal needed help finishing an album.

So he enlisted the help of three friends, Brandon Milner (who is also Jewish), Garett Van der Spek and Andrew Eckes.

"It was an almost organic growth," Mychal explained.

"The guys in the band are my friends too and they are fantastic musicians who have the same mindset as me.

"We have developed a strong bond and we have a lot of fun together."

Campfire OK's music has been labelled as folk, Americana and pop rock, although Mychal prefers to call it pop-focused and jazz influenced.

"We are making timeless music," he said. "We only use instruments acoustically and we don't use synthesisers."

Mychal, who also performs in singer-songwriter Bryan John Appleby's band, is optimistic about the future.

"We are all really excited at the moment, especially with our first album coming out," he said.

"We are planning on touring with other bands in America, but I would also love to tour the UK too, as I have never been.

"It is something I am striving for."

Mychal, who said he is proud to be both Jewish and a Cohen, associates himself with Seattle's Jewish community and would like to visit Israel soon, with his girlfriend Sarah, who is also Jewish.

"Sarah is the love of my life and very supportive of what I do - she is passionate about the band's success," Mychal said.

"She is confident that we are going to great heights."

And Mychal's pride in his roots led to Campfire OK recording their own Chanucah song, Dreidel, Dreidel.

He explained: "We recorded it because XO Publicity makes a holiday compilation of their artists doing holiday 'themed' songs every year.

"It is a good way to let people know that you as a musician can create music for all types of people.

"We chose Dreidel, Dreidel because everyone always does Xmas themed music, but we have two Jewish members

"It was a blast to record. Simple as that."

Watch the Christian Hansen-directed video for Dreidel, Dreidel at www.vimeo.com/17482563
Posted by xokayteamac at 2:53 PM