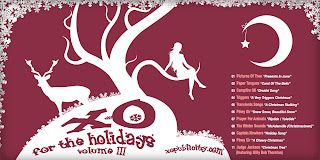 It’s the season of holiday music and gift giving, so why not put the two together? XO Publicity, a Portland, OR PR group that represents independent musicians, is one of the many groups (we’ll discuss others anon) that’s giving away free downloads to get your Cool Yule mixes started.

An 11-track compilation, entitled “XO for the Holidays Vol 3” is available here. (Bonus: Volumes One and Two are still up and free for the taking as well).

The set includes a few seasonal standards, like Paper Tongues’ muscular take on “Carol of the Bells” and a banjo-accented version of the “Dreidel Song” by the Seattle-based indie-rock/Americana quartet Campfire OK (due to release a new CD in February).

But the majority of the tracks are original or much more obscure songs, which actually makes for a nice break from a 358th version of “Little Drummer Boy." Minneapolis, MN’s Pictures of Then, for example, slow down their usual rock attack for a quiet little number called “Presents in June.” “A Christmas Stalking,” from Transient Songs, creates a languid vibe with male/female vocal interplay, while The Triggers’ “A Very Triggers Christmas” is a harmony-laden pop/rock confection.

Percolating percussion drives The Winter Sounds “McAdenville (Christmastown),” a wistful holiday ode from a Pittsburgh quartet with a touch of Brit-pop melancholia in its vocals. Prayer for Animals, a band that lists its hometown as Austin/San Marcos, starts off its contribution, “Riptide-Yuletide,” as a surf guitar-powered instrumental before devolving into something a little more edgy, but nowhere near as dark as Captain Nowhere’s somewhat angry “Holiday Song.”

And, saving the best present for last, the DAME highly recommends a pair of charmers – “A Cheery Christmas” and “Snow Snow, Beautiful Snow” – from Piney Gir (pronounced as in "girl”) a female American musician and singer, (whose real name is Angela Penhaligon) born in Kansas and now based in London. Between her lovely voice and the playful sentiments of the songs, Piney Gir offers two new tunes that sweetly capture the spirit of the season.

Actually, she’s got three. In reading up on this new singer/songwriter, I found another free download from Gir being offered by a site called Joyzine, which is offering an “advent calendar” of free tracks, one each day until Christmas. Not all are holiday themed but Piney Gir’s “Love is a Christmas Rose,” surely fits the bill.

One caveat: The 11th song on the compilation, “Christmas Tree,” by Judge Jackson featuring Billy Bob Thornton (yes, the actor) may not yet be available. The track that was originally posted was pulled when Thornton asked for it to be replaced by another mix, but should be back up any time now.