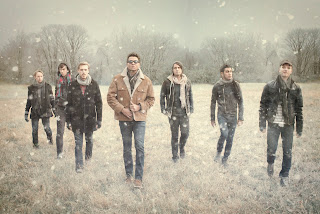 The three-piece rock band, Civil Twilight originally hailed from Cape Town, South Africa before moving to LA. They perform alt-rock music with strong vocals. Several of their music have been featured on television including on such shows as One Tree Hill, House, Harper’s Island and Terminator: The Sarah Connor Chronicles. Recently, their song “Letters From The Sky” was the iTunes’ Free Download of the Week. Their self-titled release is on Wind-Up Records…Paper Tongues are rockers from North Carolina who fuse rock n’ roll with hip-hop, funk, rap and soul. The recently released a self-titled debut which charted on Billboard’s top 200 chart… The rock group Evaline are making the rounds here in the East, introducing their band new EP, Patterned, to audiences.
Posted by xokayteamac at 12:43 PM