I’m quite excited about The Fuzzy Ball, coming to Neumos on Thursday (December 16, and then to the Wonder Ballroom in Portland the following night

There are plenty of reasons that I’m hopelessly behind on compiling my end of year lists and thoughts, as most music writers are obligated to do. One of which is that I spend an unusually large amount of time listening to two albums repeatedly: My Bloody Valentine’s Loveless and The Jesus and Mary Chain’s Psychocandy. I usually can’t get enough reverb, feedback, distortion, etc…, whatever noise those bands (and their followers like The Raveonettes, Black Rebel Motorcycle Club, The Big Pink, etc…) make. That should surprise exactly no one considering that “Another Rainy Saturday” is a 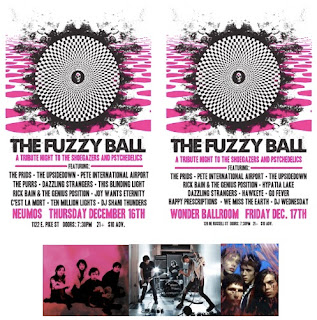 Needless to say, I’m quite excited about The Fuzzy Ball, coming to Neumos on Thursday (December 16, and then to the Wonder Ballroom in Portland the following night). Taking the name of the event from fuzzy guitars, the show will feature 10 bands of the shoegaze/pyschedelic variety playing four songs each, one original and three covers. Some of the bands playing are The Prids, The Purrs, Joy Wants Eternity, amongst others. The press release explains:

On each night 10 bands will go on stage and each play one original song and three cover versions of the Shoegazer or Psychedelic variety (i.e. Fuzzy guitars being the main ingredient). If you’re unfamiliar, the “Shoegazer” genre emanated from the UK in the 80′s with bands such as Cocteau Twins, Ride, My Bloody Valentine, Spacemen 3, Slowdive, Lush, Jesus & Mary Chain, etc. all staring heavily at their effects pedals (not their shoes as was reported by the press) to create this wonderful surreal and melodic wall of sound. Also being celebrated is the ultra-hip resurgence in Psychedelic-Pop-Rock music made popular again today by artists like The Raveonettes, Ulrich Schnauss, Black Rebel Motorcycle Club, The Flaming Lips, The Black Angels and Brian Jonestown Massacre, among many others.

Entrants will also receive a 20-song compilation featuring tracks from bands playing The Fuzzy Ball, as well as favorites like A Place to Bury Strangers, Serena Maneesh and The Raveonettes.
Posted by xokayteamac at 12:43 PM