Primarily the work of a duo, Transient Songs sounds like a full band on Cave Syndrome. 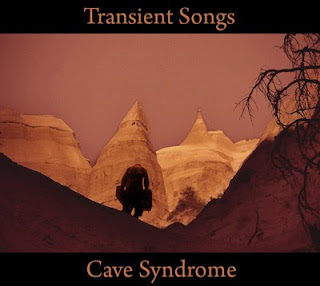 Primarily the work of a duo, Transient Songs sounds like a full band on Cave Syndrome. Even though the group likes to compare itself to The Church and The Chameleons, its music reaches back a bit farther, into the neo-psych of Green on Red or Dream Syndicate quite a bit.

This stuff is really singer-songwriter work. You know how it is: acoustic guitar and some strings, vocals earnest and up front in the mix, bluesy at times, sometimes drums with brushes (“Golden Gardens”). The electric guitar takes it all into mild psychedelia, especially once the reverb starts consuming the singing. “Smoking Slows the Healing” gets pretty thick and lush, with the expected guitar digressions mid-way through. The album has a few surprises. “The Cancer In Our Bloodlines” has some sort of key change that takes it from depressing and hopeless to pointed and uplifting. Some of the lines get a little clunky or cliched (“There’s an old fire burning / Right between your thighs” and “How long should you live before you live for yourself?” don’t quite come across as profoundly as intended). The rollicking bridge and meandering finish to the song defy the album’s patterns.

“Sin Through The Summer” works up a sweat and gets as close to a rock sound as anything else on the record, and it’s offset by the spooky old-school psychedelia of “Astoria”, whose narrative of lost places fits its melodic mood. The song ends before it even gets going, though, leaving it feel unfinished.

You can tell that the band takes its compositions seriously, even if it works over certain tropes until they wear thin. That’s why it’s pleasant to hit on a song like “Greenwood Backyards,” where the mid-song shift from jumpy piano to Dead Meadow stylings make you remember that these guys have more ideas than they really let you in on unless you’re paying attention.

File Under: neo-psych, Songwriter
Posted by xokayteamac at 12:43 PM